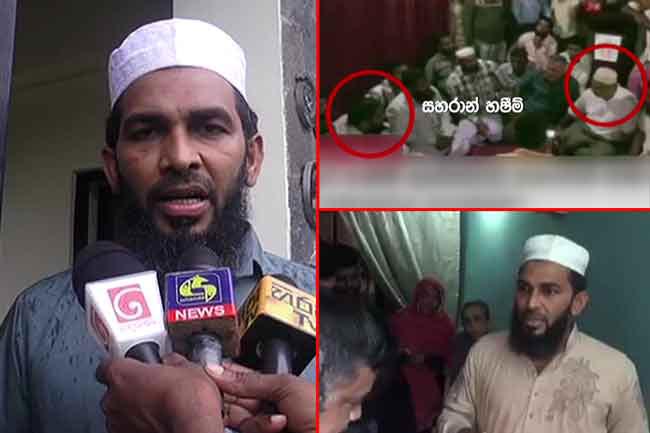 The Chairman of the ‘Organization for the Protection of Muslim Rights’ Moulavi Mohamed Miflal says that he is has received a lot of harassment following the revelation of the controversial video of Minister Rauff Hakeem and Easter attacks ringleader Zahran Hashim.

The ‘Organization for the Protection of Muslim Rights’ handed over to police a CD containing footage and images from a discussion allegedly attended by both Hakeem and Zahran.

The organization demanded the arrest of the Sri Lanka Muslim Congress (SLC) Leader Rauff Hakeem over his alleged connections to the leader of the now-banned National Thowheed Jamaath (NTJ) organization, Zahran Hashim.

However, commenting to the media, Hakeem stated that he did not know of Zahran Hashim on the day of the relevant discussion.

In this context, the house of the ‘Organization for the Protection of Muslim Rights’ Chairman, Moulavi Mohamed Miflal, was raided by the police, yesterday (19).

A stock of handbills and posters themed ‘Stop to the 70 years of deception’ was seized by the Kantale police during the raid.

Another haul of the same handbills was seized while en route to Trincomalee. The Police said that the relevant handbills and posters cannot be utilized without prior permission from the Elections Commission.

Accordingly, the Moulavi Miflal arrived at the Elections Commission today (20) to obtain the necessary approval. Speaking to the media, the moulavi stated that he is being increasingly harassed following the revelation of the video.