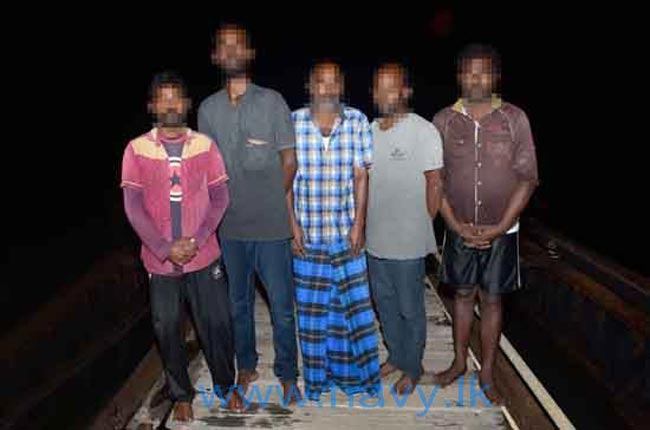 The Sri Lanka Navy, while conducting its routine patrols to prevent illegal activities in Sri Lankan waters, has apprehended five persons plying on a suspicious dinghy in the Mannar seas, yesterday (20).

Having spotted a suspected dinghy in the sea area north of Mannar, the Navy on patrol has searched the suspicious vessel.

During the search, the Navy managed to nab 03 illegal immigrants returning to the country and they have been identified as Sri Lankans, stated the Sri Lanka Navy.

Further, 02 human traffickers who had orchestrated this illegal attempt were also apprehended by the Navy.

Reportedly, the traffickers are residents of Pesalei and Urumalei areas, aged 30 and 34.

Meanwhile, the 03 illegal immigrants returning to the country have been identified as dwellers of Jaffna, and Mannar districts, aged 28, 37 and 49.

The 05 suspects and their vessel to they were handed over to the Talaimannar Police from the naval base SLNS Thammanna, for onward legal action.

One of the suspects has been found to be a former Police officer attached to the Pudukuduirippu Police Station who had migrated to India by illegal means.

Sri Lanka Navy is successfully patrolling the coastal belt of the island and has been able to effectively suppress a large number of illegal activities, including illegal migration attempts by sea.