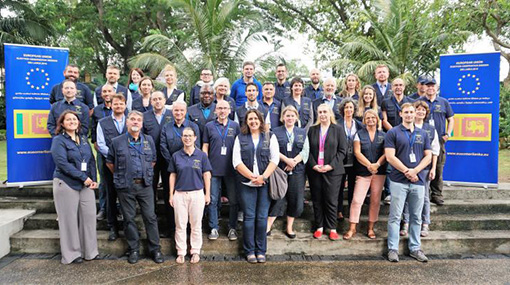 EU observers deployed in Sri Lanka ahead of presidential election

The Chief Observer, Marisa Matias, a Member of the European Parliament from Portugal, said: “It is a great privilege to have been given this opportunity to lead this sixth EU EOM to Sri Lanka.

“The presidential election marks an important stage in Sri Lanka’s democratic process and I very much hope our presence will contribute to its transparency.”

The Deputy Chief Observer, Dimitra Ioannou, explained the make-up of EU EOM: “We are in Sri Lanka with a team of 30 highly experienced long-term observers (LTOs), who deployed to all nine provinces of Sri Lanka this morning. They will be meeting a wide range of election stakeholders in their areas and begin sending first-hand accounts from the field soon.”

The EU EOM will carry out a comprehensive election assessment, focusing on the legal framework, electoral administration, voter registration, campaigning, the conduct of the media, including social media, voting, counting and tallying, and the transmission of results. The Mission will remain in the country well beyond election day to observe any appeals or complaints that have been or may be raised.

A core team of nine experts arrived in Colombo on 11 October. For the election day, they and the long-term observers will be joined by thirty short-term observers as well as by a delegation of up to seven Members of the European Parliament, bringing the total mission strength to some 80 observers.

All EU EOM observers are bound by a code of conduct, which requires strict neutrality, independence and non-interference. The EU EOM undertakes its work in accordance with the Declaration of Principles for International Election Observation.

Ms. Matias will present the EOM’s initial findings in a preliminary statement at a press conference in Colombo about two days after election day, irrespective of whether the results have been announced. She will later return to Sri Lanka to present the mission’s final report, with recommendations for future improvements to the electoral process, usually some two months after the end of the current process.