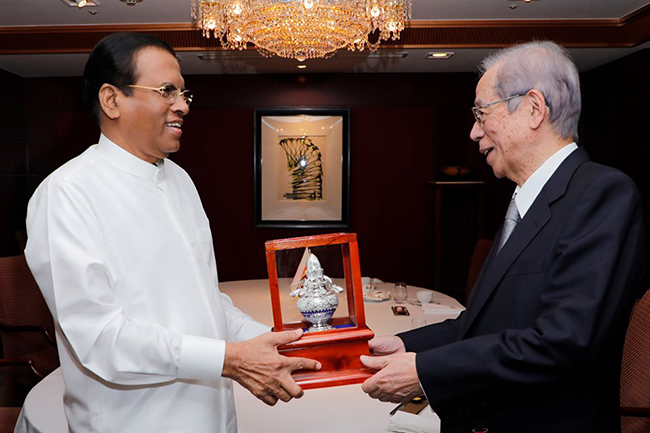 President Maithripala Sirisena, who is on a three-day state visit in Japan, met the country’s former Prime Minister Yasuo Fukuda in Tokyo today (22).

The former Prime Minister and the former Japanese Ambassador to Sri Lanka Kenichi Suganuma called on President Sirisena who left for Japan to attend the Enthronement ceremony of His Majesty Emperor Naruhito.

The bilateral discussions were focused on the long-standing friendly relations between Japan and Sri Lanka and the former Prime Minister commended the efforts taken during the tenure of President Sirisena to further strengthen bilateral relations between the two countries.

The former Japanese Prime Minister pointed out the necessity of continuing the service of the President for the betterment of Sri Lanka.

Former Premier Fukuda applauded the series of new programmes launched to accelerate the social development in Sri Lanka under the leadership of President Sirisena as well as the measures taken to restore normalcy in the country in the aftermath of Easter Sunday carnage.

President Sirisena has assured that he would continue to commit to the furtherance of relations between Sri Lanka and Japan ever after his retirement.

President expressed his gratitude for Japan’s assistance rendered towards the fulfilment of development and economic aspirations of Sri Lanka and further said Sri Lanka will always look out for Japan as a true friend.

The parties exchanged mementoes to mark the occasion.