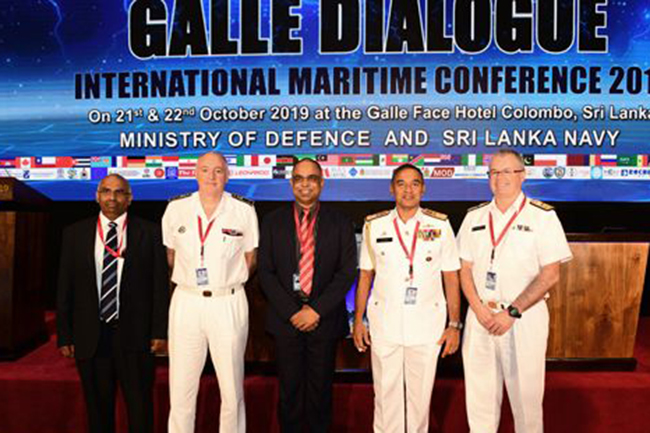 The Galle Dialogue International Maritime Conference 2019, organized by the Sri Lanka Navy under the auspices of the Ministry of Defence, brought down the curtains on its 10th edition at the Galle Face Hotel in Colombo yesterday (22).

This year’s conference held under the theme ‘Refining Mindset to Address Transnational Maritime Threats; A Review of the Decade’ was attended by representatives of 55 countries, heads of 12 international agencies and 03 defence industries.

The conference which reached the 10th landmark in its history drew the highest number of stakeholders this time around. Further, the participation of representatives from 55 countries at the seminar, which was held six months after the brutal terrorist attack on Easter Sunday, reflects the international community’s positive attitude towards the country’s security situation. It was also the opportune time for the Navy to organize the event to highlight the safety of the country for tourists.

‘Indian Navy’s Commitment to Safeguard Security Status of the Indian Ocean; An Analysis of the last 10 years of Commitments in the Indian Ocean Against Transnational Crimes, Drugs and Narcotics’ By Vice Admiral MS Pawar Deputy Chief of Naval Staff, Indian Navy

‘Ports in the Region and Sri Lanka; Do they Complement or Compete?’ By Captain Athula Hewavitharana Managing Director, Sri Lanka Ports Authority

‘Shipping Economy in the Indian Ocean: The Role of Sri Lanka’ By Mr. Iqram Cuttilan Chairman of the Ceylon Association of Shipping Agents (CASA)

‘Indian Ocean: An Analysis on the Trends and Evolution of Transnational Maritime Threats of Non-Traditional Nature - The Need for National Maritime Single Points of Contact (NMSPOC)’ By Captain Martin A. Sebastian Senior Fellow / Centre Head, Centre for Maritime Security and Diplomacy, Maritime Institute of Malaysia (MIMA)

‘Contributing to Global Efforts to Curb Non-Traditional Maritime Threats in the Indian Ocean; An Analysis by French Navy based on its Experiences in Last Ten Years’ By Rear Admiral Didier Maleterre Joint Commander of the French Forces deployed in the Indian Ocean

‘Environment Concerns in the Indian Ocean: Analysis on the Effects in Maritime Environment based on Commitment of Bangladesh for the Last Decade’ By Rear Admiral M Abu Ashraf Commander Chattogram Naval Area, Bangladesh Navy

‘Maritime Disasters and HADR - An Analysis of Naval Commitments in Past Decade from Pakistan’s Participation in the Indian Ocean Region’ By Rear Admiral Muhammad Shuaib Deputy Chief of Naval Staff, Pakistan Navy

Rear Admiral Niraja Attygalle, the Deputy Chief of Staff of the Sri Lanka Navy and Director General Operations proposed the Vote of Thanks of the Galle Dialogue 2019. On behalf of the Sri Lanka Navy, he expressed gratitude to the Ministry of Defence for permitting the Navy to organize this annual event for the 10th consecutive year and other dignitaries and diplomats who were present at the event.

Rear Admiral Attygalle also took this opportunity to thank the scholars, local and foreign representatives, organizations and organizations who made their graceful presence at the event.