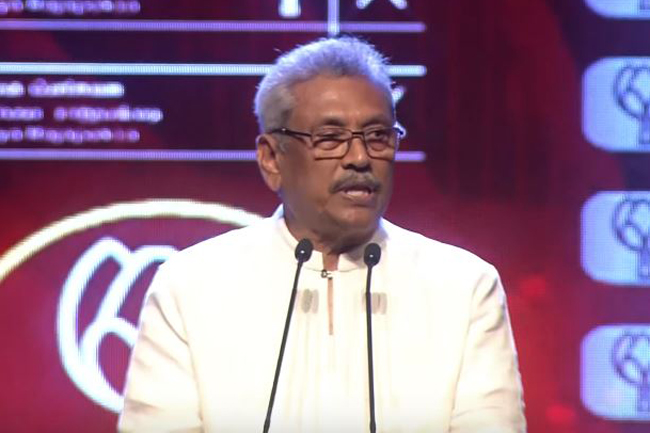 This was announced at the ceremony held to unveil Gotabaya Rajapaksa’s election manifesto, “The Ten Principles of Inclusive Government”, at the Nelum Pokuna Theatre this morning (25).

Marking the launch of the manifesto, Gotabaya Rajapaksa presented the proclamation to the religious leaders headed by Maha Sangha and then to Opposition Leader Mahinda Rajapaksa. It was then handed over to the state officials and politicians who were present at the event. The manifesto was delivered to the youth ceremoniously through the launch of the mobile application “Vision GR”.

SLPP presidential candidate’s manifesto for the next five years has given prominence to national security while focusing on following a friendly, non-aligned foreign policy, maintaining untainted governance, bringing forth constitutional reforms that are responsible for the people, creating productive citizens, establishing a people-centred economy, creating a technology-based society, development of tangible resources, sustainable environmental management and establishing law-abiding, quality society.

Delivering his speech at the event, Gotabaya Rajapaksa promised to amend the existing Inland Revenue Act in order to remove the heavy tax burden imposed on the general public.

He also pledged to reduce the income taxes for the manufacturing sector and to remove the Economic Service Charge (ESC) as well as the withholding tax.

Rajapaksa also vowed to slash the VAT rate to 8 percent and to revoke the levies on religious places.

If elected, he intends to streamline the operations of the Inland Revenue Department, Sri Lanka Customs and Excise Department by introducing the use of technology.

“In our future developmental plans, we look forward to great growth in the service economy,” Gotabaya Rajapaksa said.