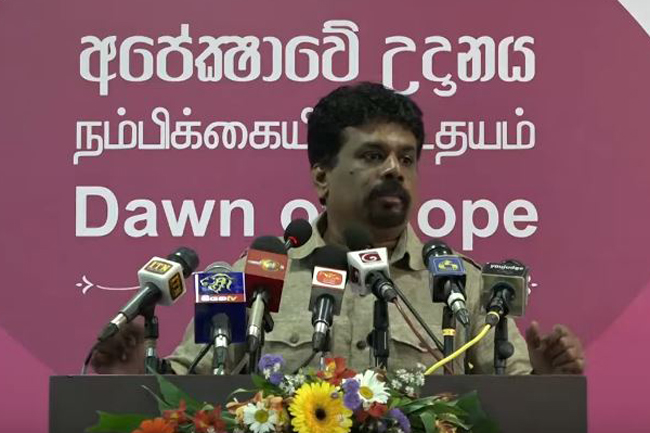 The presidential hopeful of National People’s Power (NPP), Anura Kumara Dissanayake says a legal obligation will be established in the future to implement the manifestos presented at political platforms.

Dissanayake’s presidential election manifesto titled ‘Hope of Nation’ was unveiled in a ceremony held at The Foundation Institution this morning (26).

The country will be established upon three pillars; law and democracy, an administration without corruption and frauds, a State in which public security and national peace is ensured, Dissanayake vowed while addressing the gathering.

Fraudsters and corrupt people have never developed a country, he said, adding that a nation can only be developed by acquiring the establishment of the aforementioned three pillars.

Dissanayake says, in the country, there should not be any person, who fails to abide by the laws, and the Head of the State is not exempted from this.

He pledged to transform the country’s politics, which has now become a business for many, to public service.

He vowed to repeal the pension granted for the Members of Parliament for a five-year single term and not to use the taxpayers’ money to support the former presidents or their spouses.

If elected, Dissanayake intends to limit the Cabinet to 30 and stressed that he would not allow ministerial posts such as State Ministers and Non-Cabinet Ministers.

The vehicle permits given to the parliamentarians will also be revoked under Dissanayake’s administration.

He also assured that any form of extremism would not be allowed in the country.