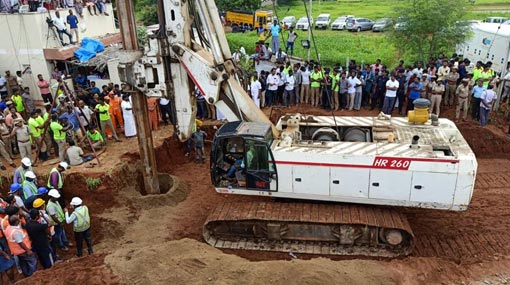 Personnel from India’s National Disaster Response Force (NDRF) and other government agencies in the state of Tamil Nadu continue to face the uphill task of rescuing a two-year-old boy who has remained trapped in an abandoned well since Friday.

Efforts to rescue the child suffered a setback on Saturday when it was confirmed that he had slipped further down the well from an initial depth of 35 feet to over 90 feet.

On Sunday morning, as India celebrated Diwali, one of its most important holidays, the rescue operation was delayed due to rocks piling up near the bore well, Indian news agency ANI reported.

Rescue teams are now digging a hole parallel to the bore well in an attempt to reach the child. A rig (an integrated drilling system used for creating water and oil wells) used by the central government-owned Oil and Natural Gas Corporation (ONGC) is being used to create an alternate pathway to reach the trapped infant under the supervision of the NDRF, Tamil Nadu State Disaster Response Force and fire service personnel.

Currently six rescue teams are involved in the rescue operation Diwali holiday weekend, officials at the site were quoted as saying.

For the moment, the child is safe and breathing but his actual condition could not be accurately assessed because of the layers of wet mud around him, they added.

A number of of netizens took to social media to express their anguish over the incident as well as offer their hopes for his survival, using the hashtags #SaveSurjith and #prayforsurjith.

The state government has said all efforts are being made to save the child.