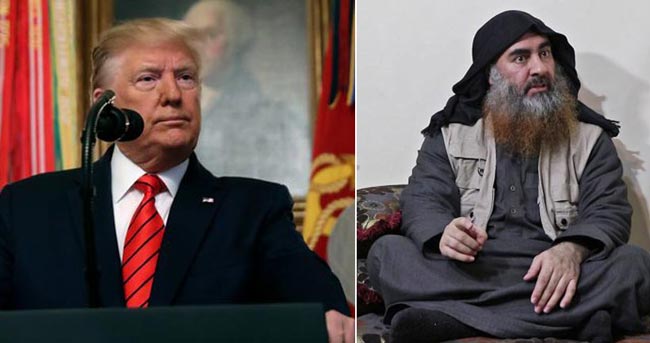 US Special Operations commandos carried out a raid in the north-west province of Idlib that left ISIS leader Abu Bakr Al Baghdadi dead, US President Donald Trump confirmed on Sunday.

In a White House speech, delivered at a nontraditional time for presidential remarks, the American leader confirmed media reports that the elusive militant chief who presided over a group that controlled large areas of Iraq and Syria was the target of the overnight mission in the village of Barisha.

The mission was approved by Mr Trump last week to take place in the last major rebel-held bastion in Syria. The death of Baghdadi gives the president a major victory after weeks of criticism about his decision to withdraw troops from northern Syria, which led to a Turkish offensive against allied Kurdish fighters that left dozens dead.

At least seven other people were killed in the raid. They included his two wives, his son, his personal bodyguard Gazwan Al Rawi, his personal assistant Abu Saaed Al Iraqi, Abu Al Yaman Al Shami, the figure in charge of ISIS’s security in Syria, and Abu Mohammed Al Halabi, known as a senior leader of a militant organisation in Idlib known as the Hurras Al Din, or Religious Guards, a security adviser to the Iraqi government told The National.

The location was hundreds of miles from where Baghdadi was believed to be hiding. It had long been thought in intelligence circles that he was in ISIS-controlled pockets along the Syrian-Iraqi border. But ISIS lost their last sliver of territory in March when the hamlet of Baghouz was reclaimed by the Syrian Democratic Forces, a Arab-Kurdish coalition of fighters leading the ground battles against ISIS in Syria.

Iraqi intelligence helped to uncover the whereabouts of Baghdadi. Iraqi cells set up to capture Baghdadi uncovered a smuggling operation that was “used to transfer ISIS’s high-ranking leaders from Syria to Turkey,” the adviser said.

“The Iraqi intelligence services managed to recruit a member of that network in exchange for a large sum of money,” he said.

Another Iraqi official said that the country’s intelligence services provided the exact coordinates of Baghdadi’s location after arresting two members of his inner circle. Their arrests led them to a safehouse in western Iraq and more evidence about his plans in Syria, the official told Reuters.

The raid in the early hours of Sunday involved helicopters, warplanes and ground clashes in the village of Barisha in Syria’s Idlib province bordering Turkey, a commander of a militant faction in the region told Reuters.

The attack was carried out using eight helicopters, according to observers in the area, in addition to surveillance planes, the commander said.

Mazloum Abdi, head of the Kurdish-led Syrian Democratic Forces that was the US’s main local ally in years of battles against ISIS in Syria, said the operation was the result of “joint intelligence work”.

“For five months there has been joint intel cooperation on the ground and accurate monitoring, until we achieved a joint operation to kill Abu Bakir al-Bagdadi,” he tweeted.

“Successful and effective operation by our forces is yet another proof of SDF’s anti-terror capability. We continue to work with our partners in the global @coalition in the fight against ISIS terrorism,” he tweeted.

Turkish and US military authorities exchanged and co-ordinated information before the operation, the Turkish Defence Ministry said on Sunday. A Turkish official told news outlets on Sunday that Baghdadi arrived at his location in Syria 48 hours before the mission, adding that there had been “close coordination” between all parties and that the Turkish military had advance warning of the raid.

Baghdadi has been in hiding for five years and the US had offered a reward of $25 million (Dh91.8m) in return for his capture or death.

He last appeared on September 16 in a 30-minute audio message. He has been erroneously reported dead on several occasions.

ISIS’s caliphate has been destroyed after a near five-year occupation of Iraq and Syria, led by a range of international forces, including the US, the Iraqi military, European armies and the Syrian regime.

The raid comes as Western officials and experts warned that the US withdrawal of around 1,000 troops from Syria and subsequent Turkish offensive against the Syrian Kurds, the very force that helped to defeat the group militarily, could allow for a resurgence of ISIS in Syria. US Defence Secretary Mark Esper has confirmed that more than 100 ISIS militants escaped from prison in Kurdish-held territory in Syria since the Turkish offensive began.

Baghdadi’s reported residence in Idlib, if confirmed, would be surprising, analysts say, because it is largely held by rival militant factions that have clashed with ISIS in north-west Syria. The dominant faction in Idlib is Hayat Tahrir Al Sham, formerly known as the Nusra Front, which was once allied to Al Qaeda before disavowing the group in a bid to clean its international image.