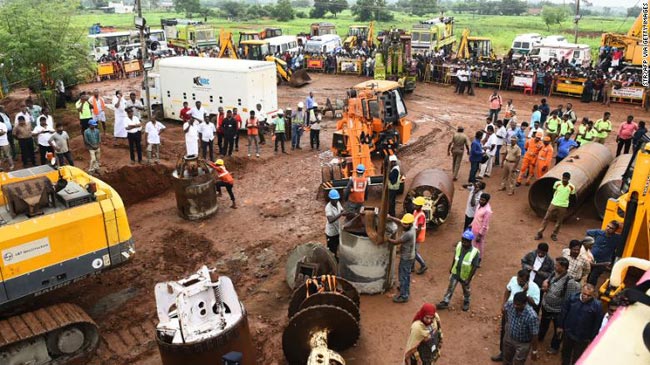 Drilling of a new borewell using a rig began at Nadukattupatti near Manapparai to reach and rescue two-year-old Sujith Wilson, who has been trapped in an abandoned borewell since October 25 evening, was proving to be an arduous task due to the rocky terrain.

Another drilling rig, with twice the power of the one already being used, has been was requested by the experts on October 27.

“The drilling bit of the first one from Ariyalur has been become blunt due to drilling through the hard rock 20 feet below the ground,” said District Collector S. Sivarasu.

The task was taking a much longer time than anticipated by the officials. The drilling began at 7 a.m. on Sunday morning and until 3 p.m. a depth of around 35 feet had been dug by the drilling rig from a private agency in Ariyalur. The rig was able to drill only about two to three feet per hour.

Health Minister C. Vijayabaskar, who has been monitoring the rescue mission from Friday evening, said the efforts were being led by officials of the Oil and Natural Gas Corporation, Neyveli Lignite Corporation Limited along with the National National Disaster Response Force. “We have to ensure that the vibrations do not disturb or hurt the child and that is one of the reasons for the slow pace of the work,” the Health Minister said.

“We did not anticipate that the rock would be so hard. Even the high powered rigs have struggled to break through the rock. We have just reached about 40 feet and the work has not progressed as planned. We have sought an advanced drill bit from Chennai and it will come soon. That will be an ultimate attempt, “ he said.

Speaking to the reporters at the site, Dr. Vijayabaskar said the team will have to review the process.

“Discussions are on with NDRF. SDRF, Commissioner of Revenue Administration, doctors and experts. We are also talking to parents. We have reached a stage where we have to take a decision now, “ he said and added the decision would be taken soon.

Using a thermal device, a team from Anna University in Chennai was able to detect the body temperature of Sujith at around 4 p.m. on Saturday. “They concluded that he might be unconscious but there is no way to confirm it,” Dr. Vijayabaskar said.

Commissioner of Revenue Administration J. Radhakrishnan also inspected the operation on Sunday. He maintained that standard operating procedures are being followed in the rescue mission.

On the criticism of the NDRF’s equipment, Dr. Vijayabaskar said that they had come prepared to reach the boy till the depth of 25 feet. However, by the time they had reached the spot, Sujith had slipped down to about 70 feet. “Efforts will continue and a high powered L&T drill rig will be mobilised soon. The drilling will be completed within five hours once the rig starts work,” he said.