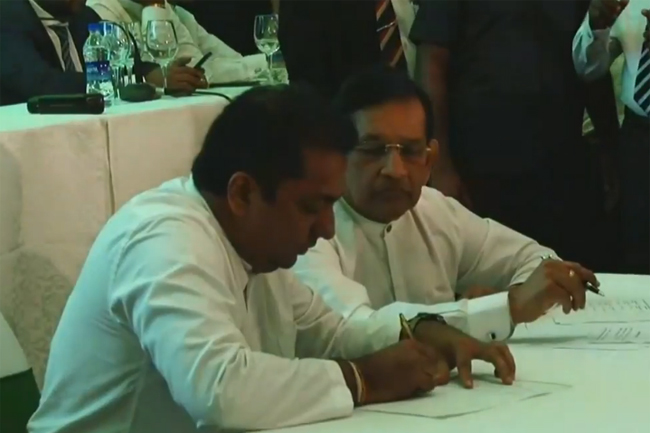 Multiple political parties led by the United National Party (UNP) today entered into an agreement to form a new coalition.

A total number of 32 political parties and 31 civil organizations had inked the accord in the presence of the General Secretary of the new alliance, Minister of Health, Nutrition and Indigenous Medicine Rajitha Senaratne.

Addressing the event, Premadasa said this unification of political parties and civil organizations will see to it that the country achieves prosperity, development, social justice, sovereignty, and territorial integrity.

Priority will be given to Buddhism and the safety of other religions and ethnicities will be ensured, Premadasa vowed.

Prime Minister Ranil Wickremesinghe, delivering his speech at the event, stated that the incumbent government has created a society where people can live freely, so much so that no one can be taken into police custody unlawfully.

The Premier also stressed that everyone linked to the Easter Sunday terror attacks has been arrested as of now, pointing out that the government has rendered its support for every measure that was taken internationally for crackdown on the ISIS organization.

Minister Rajitha Senaratne, the General Secretary of the new alliance, who addressed the gathering, stated that unlike the coalition formed by the other front-runner of the presidential election yesterday, the Democratic National Front comprises parties that are of different points of view.