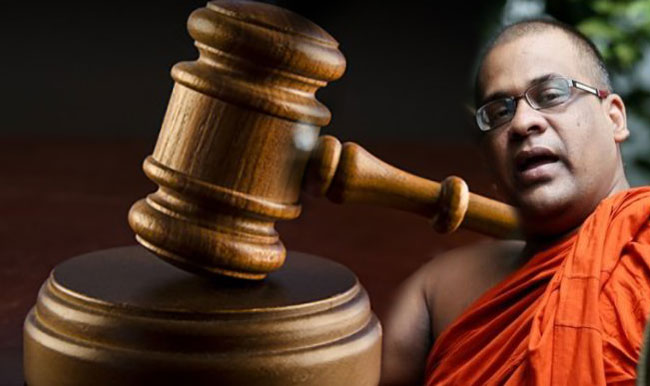 Contempt of court case against Gnanasara Thero fixed for Feb. 17

The Court of Appeal has ordered the contempt of court application filed against Ven. Galagoda Aththe Gnanasara Thero and 3 others to be considered on February 17, 2019.

The petition, accusing the respondents of violating a court order concerning a contentious burial on Hindu temple grounds, was taken up before Appeals Court chairman Yasantha Kodagoda and Justice Arjuna Obeysekara this morning (8).

Respondents named in the application including Ven. Galagoda Aththe Gnanasara Thero, the SSP in charge of Mullaitivu and the Mullaitivu Headquarters Police Inspector appeared before the court today.

The judge bench stated that the application would have to be considered in order to decide whether to issue summons on the respondents with regard to the case and therefore announced that the petition will be fixed for consideration on February 17.

The judge bench informed the two police officers named as respondents to seek a private attorney’s assistance as the Attorney General will not be representing them in the case.

The contempt of court action was filed by TNA MP Shanthi Sriskandarasa stating that the Mullaitivu Additional Magistrate had recently issued an order against cremating the remains of the chief priest of the Gurukanda Raja Maha Viharaya in the temple premises which is in dispute.

However, the General Secretary of the Bodu Bala Sena (BBS) organization Ven. Galagoda Aththe Gnanasara Thero, SSP in charge of Mullaitivu and the Mullaitivu Headquarters Police Inspector had violated the said court order and had thereby committed contempt.