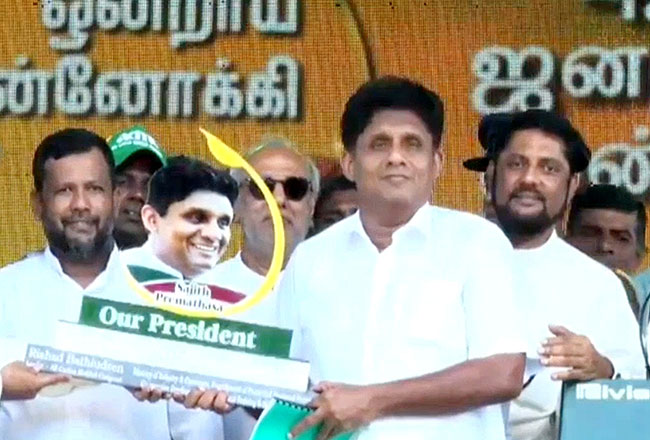 Racist elements should be defeated - Rishad

ACMC Leader and Minister Rishad Bathiudeen claims that fraudulent vote buying with cash is being planned to defeat NDF presidential candidate Sajith Premadasa and also cautioned voters to not to ‘sell their votes for a few extra rupees.’

“We have been informed that in the coming days organised vote buying will take place in Mannar area to defeat Sajith Premadasa and us. Do not be deceived by a few extra rupees,” he said.

The Vanni District MP made these allegations while addressing the 117th  NDF rally in support of Sajith premadaasa held at Mannar Sports Grounds today (8).

He was joined on stage by NDF Presidential Candidate Sajith Premadasa and Leader of SLMC Rauff Hakeem.

He added: “Therefore your vote needs to be cast very carefully. It is very important that we should be united. The Tamil speaking parties and minority parties are united is their support for NDF candidate Sajith Premadas in order to safeguard them against an oppressive tyranny that will enslave them.

“Our effort is to stand together to preserve our human dignity and stand against oppression of minorities of our own country. The forces that attacked minorities, minority leadership, minority businesses and trade and wanted anarchy here since the end of war have now banded together with the opposition Presidential candidate to enslave us.

“They are getting together with a view of enslaving the minorities. These racist elements should be defeated.”

“This challenge is not about two opposition Presidential candidates but about anarchy in our country and enslaving of minorities versus Sri Lanka’s democracy and justice. We should emerge from this challenge safeguarding our livelihoods, economy, our rights-this is our own country and we should not let anyone enslave us in our own country.

“The way to defeat such racist forces is to stand united as minorities. We should show that the minority voice needs to be respected when choosing the President of our country.

“We have been informed that in the coming days organised vote buying will take place in Mannar area to defeat Sajith Premadasa and us. Some wealthy persons in this area are preparing to hand out cash to buy your votes in favour of opposition candidate. Do not be deceived by a few extra rupees and do not sell your votes but cast your vote to bring the largest number of votes from Mannar for Sajith Premadasa’s win.”