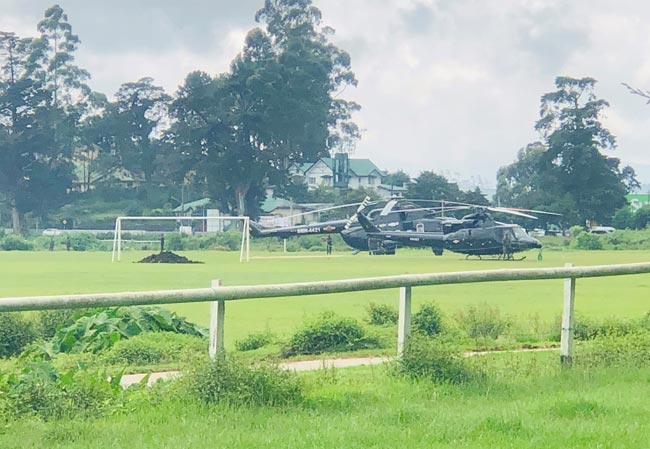 Transparency International Sri Lanka (TISL) has drawn the attention of the Elections Commission to the use of helicopters owned by the Sri Lanka Air Force (SLAF), for the transport of politicians to and from campaign rallies.

TISL states that they are concerned that this could constitute a violation of the directions issued by the Elections Commission in its gazette notice 2141/52 and calls on the Commission to take appropriate action.

The gazette states that “All Secretaries of Ministries / Heads of Departments should ensure that public funds are not utilized for the use of airplanes or helicopters or other vehicles for political propaganda activities.”

The organization said that it has simultaneously submitted a Right to Information request to the Sri Lanka Air Force seeking details of any payments that have been made for such transportation.

TISL Executive Director Asoka Obeyesekere said, “Whilst the Elections Commission has already issued directions regarding the use of state assets including helicopters, strict oversight is required by the heads of public authorities, including the Sri Lanka Air Force, to ensure that these rules are abided by. Public officials should be vigilant given the potential legal consequences that could stem from their acts or omissions”.

TISL’s network of observers has reported incidents of the use of helicopters to transport candidates and senior politicians. In the past week reports have come in from rallies in Seruwawila, Kanthale and Trincomalee. The most recent report was received and photographed by TISL observers on 10 November 2019 when two helicopters were used to transport the New Democratic Front Candidate, Minister Sajith Premadasa and UNP Leader, Prime Minister Ranil Wickremesinghe, respectively to campaign rallies in Nuwara Eliya, Badulla and Kegalle, said TISL.

Obeyesekere added, “If these services have been paid for, the ability of certain candidates to procure such services, raises questions around the financing of their campaigns. The candidates should use this opportunity to proactively disclose information on their campaign finances to underscore that state resources have not been misused”.

TISL states there has been a significant reduction in state resource abuse complaints recorded to date by the TISL network of electorate observers, in comparison to previous Presidential elections, highlighting a potentially encouraging trend. However, TISL calls on the public to remain vigilant on the misuse of public property during the final stages of the campaign period and asks that any complaints be reported to the Program for the Protection of Public Resources (PPPR) on 076 322 3442/ 076 322 3662 or via e-mail to pppr@tisrilanka.org.

A database of verified complaints of misuse of public property received through the organization’s hotline and reports from their observer network can be accessed at www.tisrilanka.org/pppr, stated TISL.