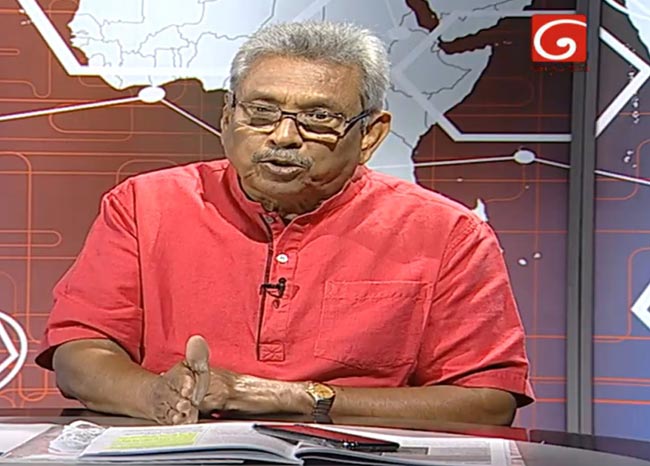 What else to do if not release falsely accused war heroes? - Gotabaya

Sri Lanka Podujana Peramuna (SLPP) Presidential Candidate Gotabaya Rajapaksa those who do not believe that he had revoked his citizenship of the United States can take it to the courts.

Joining the Derana 360° political program, the former Defense Secretary Gotabaya Rajapaksa said he is no longer a citizen of the US as of April 17th.

Stating that the US citizenship is a personal matter of his, Rajapaksa said that he followed through the procedures set by the US government to renounce citizenship and was issued with the certificate ‘Oath/Affirmation of Renunciation of Nationality of United States’ which states that he is not considered a US citizen from 17th of April 2019.

Clarifying why his name was not included in the Federal Lists of individuals who had denounced their citizenship, Rajapaksa said that it is not something relevant to him as it sometimes takes one year or more time for a person’s name to appear on the list despite having denounced citizenship.

Presenting his US passport, he stated that it has been invalidated by the US government by punching two holes in the passport and stated that anyone who still has a dispute with this can go to courts on the matter.

Responding to a query on his silence towards challenges posed by Sajith Premadasa for a debate, Rajapaksa said that his responsibilities lie with the people. By engaging with opponents personally will only result in mudslinging and nothing else, he added.

He pointed out that he has not commented or even mentioned the name of his opposing candidates during his campaign.

Speaking on implementing national policies, Gotabaya Rajapaksa said while believing that there should be a national policy for every aspect of the country, it is also the responsibility of all governments to carry good policies forward.

He says while some policies, such as a national policy on education, can be carried out by all governments; there are some policies that might not be implemented under governments with different priorities.

Commenting on how to engage professionals in the government, Rajapaksa said that the roles of a politician and a professional are different.

“Politician creates policies. These have to be implemented by officials. At this point, we need efficient officials who can work. Utilizing the proper persons to carry out the policies should be a skill of the government.

By this, I do not mean everyone should have a Ph.D. or a Masters. They should be able to achieve goals and show results. Knowledge alone is useless. The government should set goals for such professionals. We should give a chance to persons who are result-oriented.”

The presidential hopeful also commented on the topic of national security.

“Following the war, we studied the situation and trained officers further on terrorism. We even sent them for US training. We appointed a separate specialized unit for this.”

However, the current government lost focus on national security once they came into power, according to Rajapaksa.

Rajapaksa says that he believes that the mentality of the country is the most important.

“When I first became defense Secretary everyone told me that this couldn’t be ended through a military solution. But we understood that this can be done and the mentality should be shaped for it. And we did it. But this current government completely broke down this mentality.”

Gotabaya Rajapaksa said: “I know how the Commanders of the tri-forces, especially Army Commanders, committed to defeating terrorism. I have always mentioned this.  But these same Commanders now go and say that we did wrong.

They even tried to imprison the Navy Commander under false accusations.

Can political leaders choose whom to file court cases against? Is this how the law should be implemented? Is this the justice of law? What else should we do if not release war heroes who have been falsely accused in this manner?”