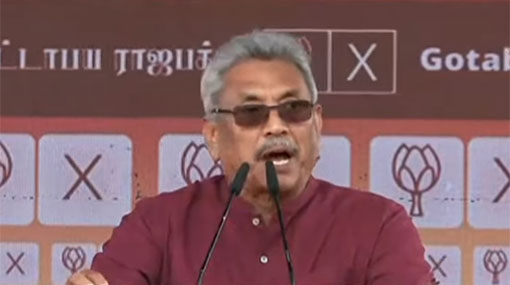 SLPP presidential candidate Gotabaya Rajapaksa says that he will increase the daily wage of estate workers to Rs 1,000 and also they will establish a state university for the students in the estate areas of the Central Province.

Addressing an election rally held in Kotagala area in Hatton, Rajapaksa said that he spoke to the youth and that they informed him that students selected to university have to travel all the way to areas such as Jaffna and this leads to economic problems.

He said that they had asked for a university to be established in this region and that he promised them to build a new university in the province.

Speaking in Tamil then, Rajapaksa then went on to say that he will give the estate workers the daily wage of Rs 1,000 which they have been calling for.

He also said that new home will be built and provided to the estate workers and that he will make sure to complete it within his five-year term as president.