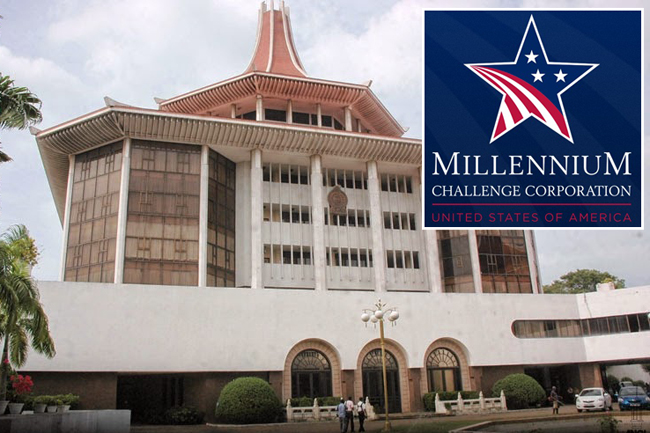 FR petitions against MCC Agreement fixed for support on Jan. 31

The Fundamental Rights (FR) petitions filed against the signing of the Millennium Challenge Corporation (MCC) Agreement with the United States have been fixed for support on the 31st of January 2020.

When the petitions were taken up, Deputy Solicitor General Farzana Jameel, speaking on behalf of the Attorney General, told the judge bench that respondent Finance Minister Mangala Samaraweera has not received the annexes of the petitions.

Hence, she sought the Supreme Court to fix a date to present submissions in this regard.

Representing the petitioners Government Medical Officers’ Association (GMOA) and Ven. Anguruwelle Jinananda Thera, President’s Counsel Sanjeewa Jayewardene said the hearings of these petitions must be proceeded with, considering it an urgent matter.

He pointed out the MCC Agreement has a negative impact on Sri Lanka’s national security. If this accord is signed armed US military troops can freely move into the country, he said further.

Such armed forces will not be subjected to any of the local or international laws, the President’s Counsel stressed, while underlining the fact that his agreement allows the US to arbitrarily acquire the country’s lands.

The judge bench then ordered the Attorney General to brief the court on the government’s stance regarding inking the agreement, on the 31st of January next year.

The petitioners were advised to hand over all relevant documents pertaining to the petitions to the respondents.

The FR petitions against the signing of the MCC Agreement were filed by the GMOA, Ven. Anguruwelle Jinananda Thera and Attorney-at-Law Darshana Weraduwage.

The petitions state that local media had widely reported recently that Cabinet approval has been granted to sign several agreements including the MCC without the consent of the Parliament or the people.

The petitioners also claimed that these agreements would be seriously harmful to the national security and sovereignty of the country and that this is a violation of the Constitution.

Therefore the petition requests the court to issue an order declaring that the decision taken by the government of Sri Lanka to sign these agreements is in violation of the constitution and to also issue an interim order preventing the signing of them.