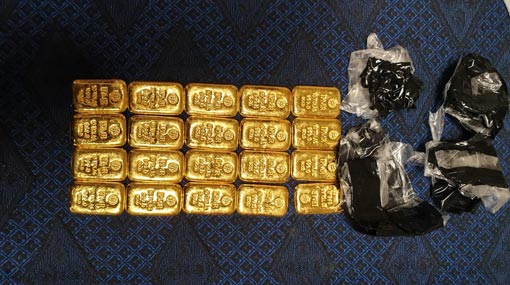 A Ukrainian female has caught in an attempt to smuggle in gold biscuits at the Bandaranaike International Airport (BIA).

The suspect had arrived from India this morning (13) when the Police Narcotics Bureau (PNB) attached to the BIA made the arrest.

Reportedly, the officials have recovered 20 gold biscuits hidden in the soles of her shoes.

The gold, weighing 2 kilograms 320 grams, is estimated to be worth Rs 20 million, stated Ada Derana reporter.

It has been revealed that the arrested Ukrainian (41) had arrived in Sri Lanka in two previous occasions in the same manner.

The suspect has been handed over to the Customs Officials at the BIA for onward investigations.