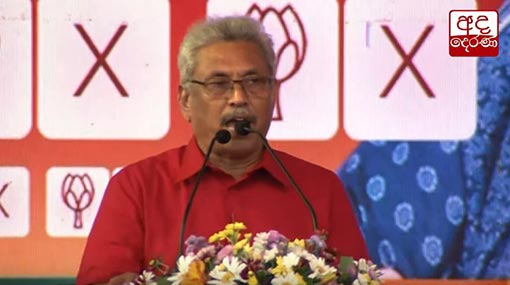 Be respectful when celebrating victory - Gotabaya

Sri Lanka Podujana Peramuna’s presidential contender Gotabaya Rajapaksa, who remained confident of his election victory, has urged the supporters to be respectful when celebrating the victory once the results are officially declared.

Speaking at a rally held in Tissamaharama area, Rajapaksa said the SLPP had carried out its election campaign with respectful and exemplary conduct.

“As we expect to establish a quality and efficient government, we request the people to celebrate the victory in a dignified manner without inconveniencing others” he added.

Addressing the mass further, the former Defence Secretary said the incumbent government, who had been in power for many years failed to do anything for the sake of the people.

“My opponents have gone to courts again to question whether I am a Sri Lankan or not. I was born in Palatuwa. Palatuwa is not located in America. It is in Matara.  How is it then that I am not a Sri Lankan citizen?” Gotabaya Rajapaksa said at his final election rally held at Weerawila in Hambantota this morning (13).

Rajapaksa said these false allegations are levelled against him as his opponents are on the verge of defeat.

“My opponents are engaging in a very different type of election campaign with such mudslinging” Gotabaya Rajapaksa claimed.

Addressing the rally held at Galle, the former Defence Secretary said the local manufacturers have seen a downfall in every sector today, while gem, biscuit and footwear companies have also crashed.

Measures must be introduced to protect the local industrialist, planter and farmer, Rajapaksa stressed.