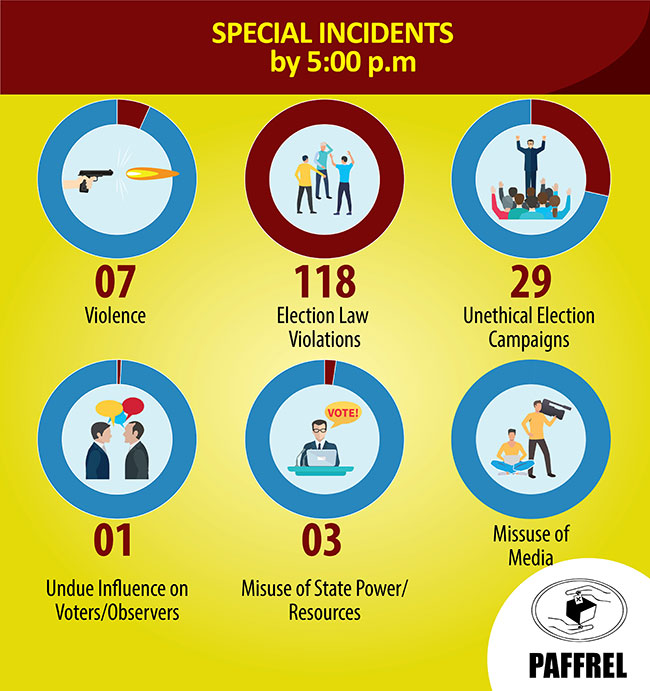 Most peaceful and lawful election in recent times - PAFFREL

The presidential election took place without widespread incidents with a high voter turnout of between 80 - 85 percent, according to local election monitor, People’s Action for Free and Fair Elections (PAFFREL).

“It was the most peaceful and lawful election in recent times even though there were several incidents, including a few serious ones.”

“Most of these incidents were dealt with speedily and effectively by the police in cooperation with the Election Commission,” it said, releasing a report on the day of election.

The election monitor said this is a positive evidence of the strengthening of institutions and rule of law that has been progressively improving in the country.

PAFFREL appreciated the role played by the Election Commission and the district commissioners for organizing these elections in a manner that enabled free and fair polling to take place on Election Day.

PAFFREL also appreciated the police and public service who also gave their full support to make this possible.

“Among the incidents noted on Election Day, the most serious was the firing at a convoy of buses taking displaced voters to their original homes in the North where they were registered to vote. However, no one was injured.

Another was the attempt to set up unauthorized checkpoints in the North by security forces.  Other incidents included five cases of assault, seven complaints of voter impersonation, four arrests of voters taking photographs of their marked ballot papers, one case of a voter attempting to smuggle out the ballot paper and two arrests for distributing election propaganda.

There were also several problems that occurred over the longer campaign period that require solutions. The first major problem was the use of the state and private media to one-sidedly give publicity to their favoured candidate.  There was a big disproportion in time allocated to candidates and to programmes attacking their opponents.

The use of social media and fake news on it during the pre-election, polling period and on the Election Day violates all the election regulations of the country. Public officers who are not permitted to engage in political activities made use of the lacuna in the law to use social media for propaganda purposes.

Another problem was the misuse of state resources for election purposes by government ministers and similar misuse by provincial councils and local government authorities.

Among other longer term issues that need to be considered is the difficulty of access of some polling stations, which required voters to walk several kilometers in remote areas and also to be inaccessible to disabled persons.  PAFFREL also urges the Election Commission to reconsider the use of religious places of worship within which to set up polling stations. There were several instances in which religious clergy attempted to influence the voters in favour of a particular candidate. There was also the issue of some Governors of provinces and other public officials openly taking partisan political positions and getting onto political platforms, which is unacceptable.

It was also brought to PAFFREL’s notice that several voters had not been registered on the electoral register and deprived of their vote as a result despite their efforts to get them registered. There is a need to find a solution to enable those who are not registered to get themselves registered and vote through a base registry that is valid for a longer period.

During the election campaign period and including Election Day, PAFFREL deployed more than 4000 personnel including 141 long term observers, 30 district coordinators, 31 field coordinators, 2480 stationary observers, 828 mobile observers and 23 All Party Operations Unit observers. They covered key centres and most sensitive areas of the country.