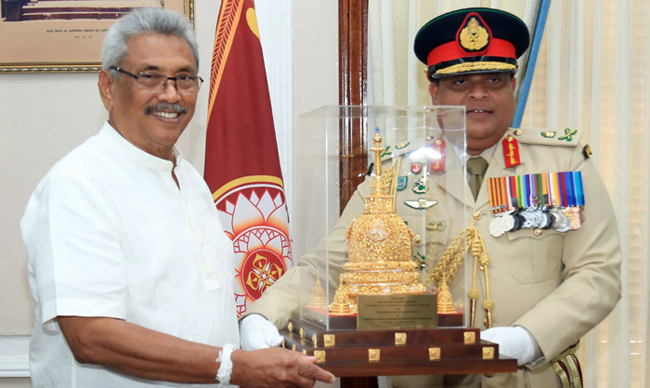 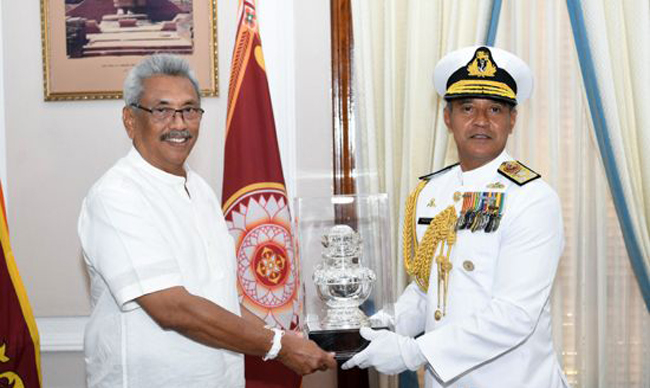 The Commander of the Navy, Vice Admiral Piyal De Silva, has called on President and Commander-in-Chief of the Armed Forces Gotabaya Rajapaksa at the Presidential Secretariat in Colombo, yesterday (19).

This was the first official meeting of the Navy chief with the President after he assumed duties as the head of the State.

The Navy Commander conveyed his wishes to President on becoming the 7th Executive President of the country and they have had a cordial discussion afterward.

Further, signifying the importance of this occasion, the Navy chief has presented a memento to the President.

In the meantime, Lieutenant General Shavendra Silva, Commander of the Army paid his first formal courtesy call on President Gotabaya Rajapaksa at the Presidential Secretariat last this morning (18).

During the courtesy visit, Lieutenant General Silva extended his best wishes to the President and assured his organization’s best cooperation all the time for performance of national commitments as per guidelines as given by the Commander-in-Chief of the Armed Forces.

Towards the end of the brief interaction, Lieutenant General Silva presented a replica of a Pagoda to the new President as a memento to coincide with the President’s inauguration of the new office.