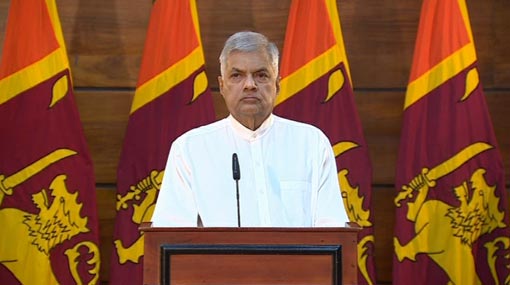 Prime Minister Ranil Wickremesinghe says that he will officially inform the President of his resignation tomorrow (21).

Prime Minister said that they, within the last 5 years, worked to ensure democracy, human freedom, freedom of expression, right to information, equality and reconciliation in the country.

Issuing a special statement, Prime Minister Ranil Wickremesinghe said that they paved for a path of sustainable development in the country.

Stating that the 19th amendment freed all institutions from politicization, Wickremesinghe says that being able to hold the last Presidential Election in a free, independent, and fair manner was a result of this.

“The future will give us the correct judgment on what we have done”, he added.

The Prime Minister said he called on President Gotabaya Rajapaksa yesterday (19) and discussed on onward action to be taken with regard to the parliament.

“Accordingly, it was decided that the people’s mandate should be accepted and allow President Rajapaksa to establish a government of his own, despite us having the majority”, said the Premier.

Prime Minister Wickremesinghe said: “I value democracy. I respect democracy. I act democratically. Accordingly, I have decided to resign from the post of Prime Minister, allowing the new President to form a new government. I will inform the President of this decision tomorrow.

During my tenure, I received insults and humiliation as well as praise. I heard both good and bad.

I thank all those who praised me, insulted me, and said the good and the bad.

I am grateful to all who assisted me with my duties.”