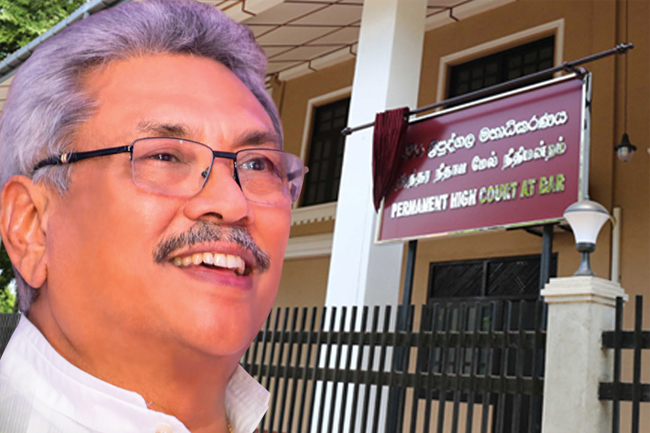 The Permanent High Court at Bar today (21) acquitted President Gotabaya Rajapaksa from the D.A. Rajapaksa Museum case and lifted the overseas travel ban imposed on him.

Considering a motion submitted by the attorneys representing President Rajapaksa, the case filed against seven defendants including the President over the alleged misappropriation of state funds accumulating to Rs 33.9 million was taken up before Special High Court’s bench consisting of Judges Sampath Abeykoon, Sampath Wijeratne, and Champa Janaki Rajaratne this morning.

Deputy Solicitor General Dileepa Peiris, speaking on behalf of the Attorney General, told the bench that as per Article 35(1) of the Constitution no civil or criminal proceedings can be instituted or continued against the President in respect of anything done or omitted to be done by the President, either in his official or private capacity.

Pointing this out, he requested the court to conclude the lawsuit against the President and release him.

The three-judge bench accordingly ruled the acquittal of President Gotabaya Rajapaksa and ordered to release his passport and to lift the overseas travel ban imposed on him. The persons who had signed as the President’s sureties in this lawsuit were also released.

The Deputy Solicitor General told the judges that the further action that is to be taken against the rest of the defendants will be duly informed at the next hearing of the case.

The Special High Court then ordered to take up the case again on the 9th of January.