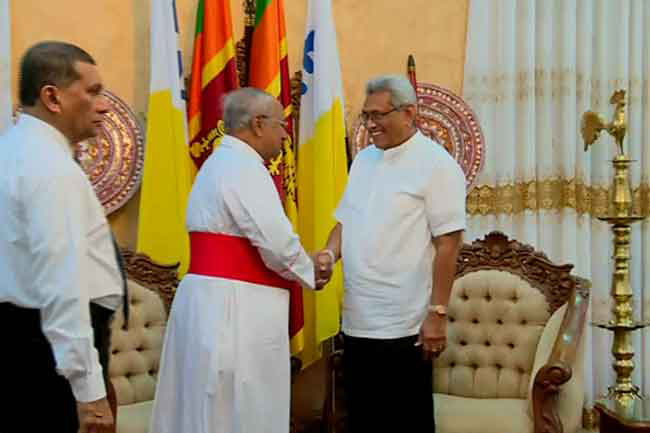 President Gotabaya Rajapaksa today (21) requested Archbishop of Colombo, His Eminence Malcolm Cardinal Ranjith to nominate a representative from the archdiocese for the proposed committee on Easter Sunday attacks which is to be established soon.

Meanwhile, Cardinal Ranjith has urged President Rajapaksa to take legal action against those who are responsible for the attacks despite their status, ethnic community or religious beliefs.

President Rajapaksa called on Cardinal Ranjith at his official residence in Colombo today.

The Cardinal, during the cordial discussion, commended President Rajapaksa for the initiatives he has taken so far.

Cardinal Ranjith told the President: “We cannot say justice was delivered to the nearly 300 people who lost their lives during the Easter Sunday attacks. Proper investigations have not been done on those who are alleged to be responsible for the attacks. In a way, they have tried to brush everything under the carpet. We must look into every aspect and area that led to these bombings and murders. We cannot allow anyone who acted to cause harm to these people to walk free, in spite of their social status, community of faith. We hope your government will ensure that justice will be delivered to those who were affected by the incident.”

Responding to this request, President Rajapaksa said: “First, I will appoint an independent committee to look into this matter and to find out who was behind it and how it happened. Second, I have already taken action to prevent such attacks from taking place in the country once again. I have appointed the best person as the Defence Secretary who is highly experienced. I have instructed him to re-build our intelligence units. I instructed him to re-establish the security networks that existed during my time as the Defence Secretary. He has also been instructed to focus on intelligence gathering and arrest those who are still free. Thirdly, as investigations continue, I will bring justice to the families of victims who haven’t been compensated in any way. These are the three aspects I am planning to focus on. You would have more confidence in the process if one of your representatives too is appointed to the proposed independent committee. That is why I waited until this discussion and haven’t appointed the committee yet. I have already an appointment to give my testimony before the current committee.”

The President further stated that what he is referring to is not about giving statements but about appointing a representative of the Cardinal to the committee.

When Cardinal Ranjith said many other countries have their own secret services to work on intelligence and terrorist threats, the President said: “We too had such intelligence service, but they were systematically compromised. There wasn’t a better intelligence service than ours back then. It was our intelligence units that located all safe houses of the LTTE in the south, but the best intelligence unit belongs to the Army because their skills were hones over 30 years of conflict. But unfortunately, they were rendered powerless. I am sure that if we allow them to continue their work without hindrances, terrorism will not rear its head again in the country.

In response, Cardinal Ranjith said their work shouldn’t also be influenced by politics.