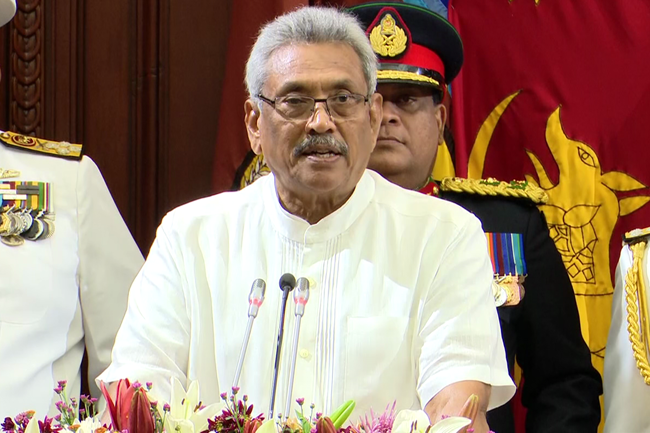 President on how heads of state institutions will be appointed

President Gotabaya Rajapaksa says that the interim government appointed for the duration until parliamentary polls are held will be a government only limited to implementing the preliminary promises made to the public in the plan presented by them.

That is why we appointed a Cabinet comprised of 15 ministers, he said, addressing newly sworn in ministers and ruling party MPs at the Presidential Secretariat this morning (22).

He stated that the people of the country gave them a resounding victory at the recent election with great expectations. “We have massive challenges. We need to succeed in those challenges and at the same time we need to fulfill the aspirations of the public,” he said.

President Rajapaksa said that the people have recently voiced their objection to the existing political culture in the country and that this government has to move away from that culture and create a new era.

He said that State Ministers will be appointed next and requested the new Cabinet Ministers to assist these State Ministers in their duties.  “We all know that in the past all that certain State Ministers did all day was practice their signature as they had no powers.”

He also said that the heads and director boards of state institutions and enterprises will be appointed by a selection board and that subject ministers can make recommendations to the board.

Rajapaksa requested the ministers that if there are any individuals who are suitable for these positions in respective state institutions, to submit their names to the board.