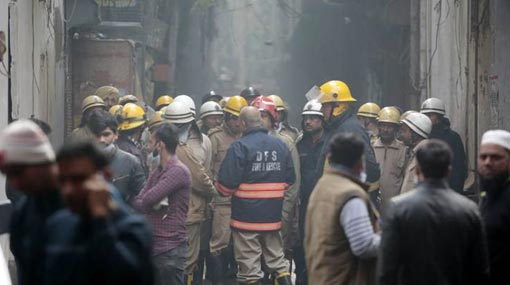 43 dead in fire at luggage manufacturing factory in Delhi

Forty-three people were killed when a fire broke out at a luggage manufacturing factory in a crowded area near central Delhi, India.

Most of the people who died were laborers who were sleeping at the factory in Anaj Mandi on Rani Jhansi Road when the fire broke out at 5 am.

The cause of the fire is not known, officials said, adding that over 50 people were inside the factory when the fire broke out. Thirty fire trucks are at the site and have taken the situation under control. The fire is suspected to have started at the workshop of the bag manufacturing factory.

The fire broke out in the early hours in the area, whose narrow and congested lanes are lined with many small manufacturing and storage units.

Many people trapped inside were rescued and rushed to RML Hospital and Hindu Rao Hospital, fire officials said.

Prime Minister Narendra Modi described the incident as “horrific” and prayed for the family of those killed in the fire.

The traffic police have asked people not to use Rani Jhansi flyover near New Delhi railway station as the road has been closed due to the incident.

Today’s incident is the worst fire tragedy seen by the city since a similar incident in Bawana last year in which 17 laborers were charred to death.