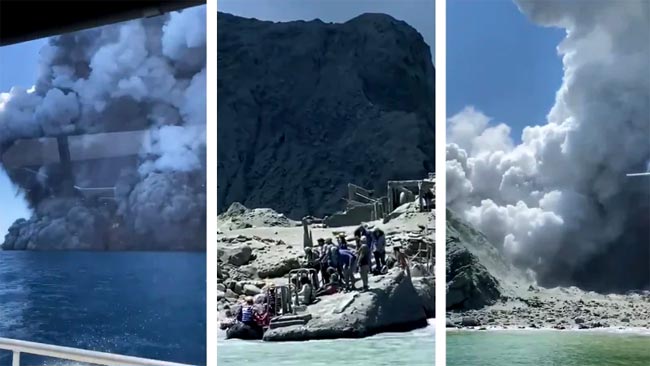 At least one person has died and many are still unaccounted for after a volcano erupted on an island off the coast New Zealand Monday afternoon local time, sending a massive plume of white ash billowing into the sky over the popular tourist destination.

Fewer than 50 visitors were on or near White Island, which is also known as Whakaari, at the time of the eruption, and 23 people have been rescued so far, New Zealand Police Deputy Commissioner John Tims said a news conference. Among the people transported to shore, most had burn injuries, Tims said. He confirmed one fatality and added, “based on the information we have, there’s likely to be more.”

It is unclear exactly how many are still trapped as dangerous conditions have prevented police and rescue services from reaching the island, Tims said.

“The island is currently covered in ash and volcanic material,” Tims said. “We are taking expert advice with regards to the safety of any rescue attempt.”

Prime Minister Jacinda Ardern said both New Zealanders and foreign visitors were on or near the island when the volcano erupted at 2:11 p.m. White Island is located roughly 30 miles from New Zealand’s North Island in the Bay of Plenty. It is uninhabited, but is frequented by tourists.

“I know there will be a huge amount of concern and anxiety for those who have loved ones on or around the island at the time, and I can assure them police are doing everything they can,” said Ardern, who noted that she will be traveling to the island Monday night along with New Zealand’s Minister of Civil Defence, Peeni Henare.

The eruption, described by GNS Science’s Ken Gledhill as a “throat-clearing kind of eruption,” released ash 12,000 meters above the island.

“On the scheme of things for volcanic eruptions, it’s not large, but if you were close to that, it is not good,” Gledhill said at the news conference. Photos of the volcano’s crater rim minutes before the eruption showed people walking nearby, the New Zealand Herald reported.

One video taken of the eruption from a boat offshore captured thick clouds rising from the island. A voice could be heard frantically telling passengers to go inside the boat’s cabin. In another clip, the island appeared to be completely enveloped by ash.

On Twitter Monday afternoon, New Zealand’s National Emergency Management Agency warned that it continues to be “hazardous in the immediate vicinity of the volcano” and urged people to pay attention to detailed safety advice, adding, “Act on it promptly.”

White Island bills itself as “New Zealand’s most active volcano,” according to its official website, which advertises a “fully-guided exploration” of the volcano’s inner crater complex as a “must-do experience.” The island’s last eruption occurred in 2016, but no one was hurt, according to the Guardian.

In the weeks before Monday’s incident, GeoNet, an agency that provides geological hazard information for New Zealand, issued multiple reports of “volcanic unrest” on the island.

“Moderate volcanic unrest continues at Whakaari/White Island, with substantial gas, steam and mud bursts observed at the vent located at the back of the crater lake,” stated a report from last Tuesday.

During Monday’s news conference, Ardern declined to answer a question about whether visitors should have been allowed to go to the island given the recent increase in volcanic activity.

“In this moment in time, the absolute focus needs to be the search and rescue operation,” she said. “There will be a time and a place to undertake further assessments. Now, we have to focus on allowing the police to do their job and focus on those who were in the vicinity of the island at the time.”