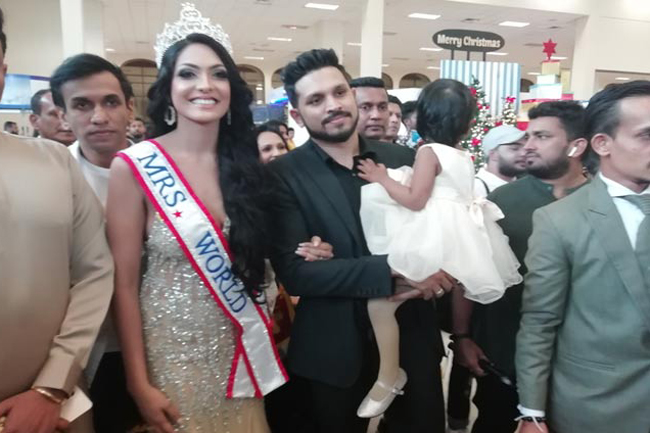 Jurie arrived at the Bandaranaike International Airport (BIA) at around 2.45 a.m. today. Reportedly, she left the airport premises at 7.00 a.m.

She was accorded a warm welcome by her relatives and many others who were at the Katunayake Airport, and she set off for Colombo in a special convoy.

Caroline Jurie from Sri Lanka was chosen as the winner out of 51 entrants who took part in the Mrs. World 2020 finale on the 6th of December in Las Vegas, United States.

Contenders from Ireland and US Virgin Islands were crowned the 1st and 2nd runners-up of the competition.

Accordingly, Caroline Jurie had managed to bring the Mrs. World crown back to the country after 35 years.

Former beauty queen and current Mayor of Colombo, Rosy Senanayake was the first Sri Lankan to win the title in 1984 at the first Mrs. World contest held in Queensland, Australia.