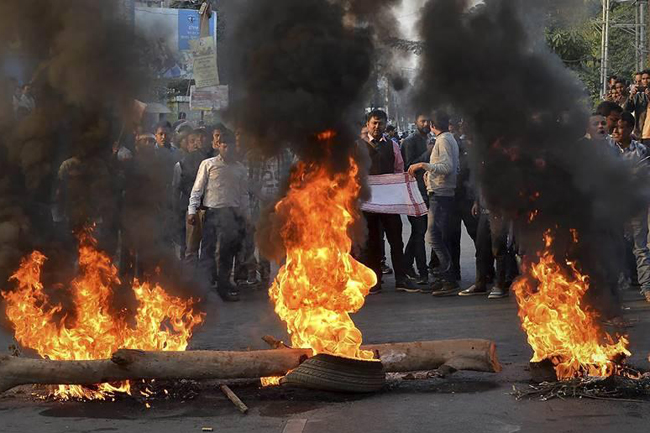 Violent protests against the Citizenship (Amendment) Bill (CAB), 2019, continued across several districts in the Brahmaputra Valley in India on Thursday with an indefinite curfew imposed in Guwahati, Dibrugarh and Tezpur.

Two persons were killed in firing by security forces in Guwahati. Incidents of police firing were reported from several areas of the State capital, including Hatigaon, Lachitnagar, Bashishta, and Lalungaon.

Sources at the Gauhati Medical College and Hospital said 11 people were brought with gunshot injuries.

The government also extended by 48 hours the suspension of mobile Internet and data services in the affected districts.

As thousands of protesters descended on the streets, crowds attacked the offices of the BJP, the RSS and the AGP, and the houses of the MLAs belonging to the ruling coalition. BJP legislator Binod Hazarika’s house in Dibrugarh district was set on fire and Batadraba MLA Angoorlata Deka’s house in Morigaon district was damaged in stone-throwing.

Five persons, including a police officer, sustained bullet wounds when a mob attacked the house of Adivasi BJP leader and Union Minister Rameshwar Teli in Duliajan late on Wednesday.

Meanwhile, panic buying of essentials at a premium began as curfew relaxed from 6 a.m. to 1 p.m. on Friday in several cities of Assam while mobile internet/data service suspension was extended till Saturday 7 p.m. AASU and other civil society leaders continued to protest in a “Gandhian manner” while calling for calm and shunning violence.

Educational institutions in the affected districts have been closed till December 22 and the examinations have been postponed.

A government order said Mr. Singh was posted as ADGP, Law and Order, pending repatriation from central deputation “in the interest of public service”.

The State has indicated a crackdown on protesters with more than 5,000 paramilitary personnel, besides the Army, deployed in sensitive areas. It has also instructed the local authorities to take action.

RTI activist and peasant leader Akhil Gogoi was arrested in Jorhat district as a preventive measure, officials said. A senior official of the Jorhat administration said Mr. Gogoi was taken into custody to avoid any “untoward incident” in the district, as well as other parts of the State by his supporters.

Samujjal Bhattacharya, advisor to the All Assam Students’ Union (AASU) that is spearheading the anti-CAB protests, hinted at a “design to discredit the movement” with violence and arson. “We will never accept CAB that threatens the very existence, language and culture of the indigenous Assamese people. We will protest, but in a peaceful, disciplined way,” he said at a meeting.

As protests continued, Assam Assembly Speaker Hitendra Nath Goswami in a statement late on Thursday said doubts over the CAB were not baseless, and there was a strong possibility of it creating divisions if implemented. Mr. Goswami appealed to the Centre to take necessary steps to redress the anger and grievances of the people of Assam. A senior Home Ministry official in Delhi said the Ministry was monitoring the situation closely but added that the decision to snap Internet connectivity in Assam had been taken by the State government following reports from the intelligence agencies.