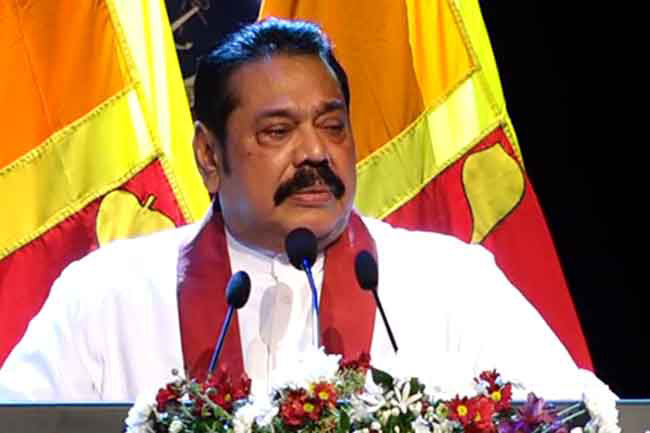 Initiatives will be taken at the international level to restore to the armed forces, the respect and dignity they deserve, says Prime Minister Mahinda Rajapaksa.

PM Rajapaksa made this remark addressing the graduation ceremony of the Defence Services Command and Staff College yesterday (13). This was the first time he formally addressed members of the armed forces after being appointed Prime Minister.

He pledged the armed forces that the humiliation and injustices that they were subject to over the past five years will be rectified and restitution provided where necessary. “We all know that there are various agendas at the international level operational with regard to our armed forces. There are instances where certain foreign parties objected to promotions made within our armed forces. No sovereign country will allow such foreign interference in the internal affairs of its armed forces.”

The change of government in January 2015 was almost as if a hostile foreign force had invaded and taken over Sri Lanka, PM Rajapaksa said adding that a comprehensive programme was launched to harass and demoralize the armed forces, to intimidate the Maha Sangha and to cow the majority community into submission and to obtain through dirty politics what could not be obtained through nearly four decades of civil war. He recalled how the previous government co-sponsored a resolution against Sri Lanka with the UN Human Rights Council in Geneva, pledging to institute war crimes trials against members of the armed forces with the participation of foreign judges and prosecutors.

Looking back on the defeat of the LTTE terrorism ten years ago, the Premier said it was an achievement that will lie to the credit of the Sri Lankan armed forces not only locally but internationally as well, for decades to come.

Speaking on the Easter Sunday terror attacks, he said, this new terrorist threat will have to be contained by whatever means necessary. “If we don’t get on top of the situation, all neighbouring countries including India, the Maldives, Bangladesh, and even countries further off like Myanmar, Thailand and Malaysia will be under threat.”

“We have been elected to power to safeguard the national sovereignty and national security of Sri Lanka and we will do whatever it takes to achieve that objective. Overcoming the challenge that we were confronted with in the form of the LTTE required military hardware and pitched battles with a terrorist army. The new situation that we are faced with requires intelligence operations, cooperation with international intelligence agencies and certain strategic foreign policy initiatives,” the prime minister continued.

“We, the political authorities will provide the armed forces of Sri Lanka with the leadership to achieve the objective of ensuring the national security of a sovereign Sri Lanka,” PM Rajapaksa pledged.