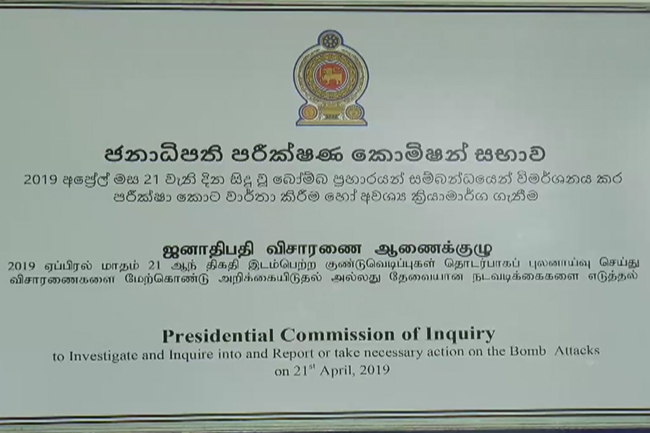 The Presidential Commission of Inquiry probing the Easter Sunday Attacks has been told that certain pages of police logbooks were replicated with fabricated information by the Kotahena Police, in an attempt to conceal the truth about the series of terror attacks on Easter Sunday.

Several police officers made these revelations while recording their statements with the Presidential Commission yesterday (13).

Constable A.L. Nalin Bandara, who worked in archives at the Kotahena Police, has told the Presidential Commission: “I received a document on the Easter Sunday attacks two days after it happened. Then-OIC of Kotahena Police Mahinda Karunaratne asked me to log that I received the document prior to the attacks.”

He added that Karunaratne had made evident that it will remain a secret since no one was in the vicinity when the constable received the document.

He further said, in the immediate aftermath of the attacks, SP Sanjeewa Bandara who was in charge of Colombo North and his private assistant Upendra contacted him to ask whether the document was logged.

The constable had told them that he made not in police log books that the document was received on April 13.

When asked as to why he made such a fabrication, the constable said he did so at the request of the OIC of Kotahena Police.

Inspector Sirisena Abeysinghe of Kotahena Police, who was the next to testify before the Presidential Commission of Inquiry, said that although it was logged that he set off for duty at St. Lucia Church on the day of the attacks at 6.15 a.m. he actually went there at 8.5 a.m. after the explosion.

“I logged a bogus time and was at home when the OIC of Kotahena Police called me and informed of the attacks on the Kochchikade Church after which I went to the scene,” he said adding that upon returning to the police station he had amended the time he set off for duty to 9.45 a.m.

“All the timings were changed upon the request of Kotahena Police OIC Mahinda Karunaratne,” he continued.

In the meantime, he conceded that page numbers were reinserted to the police logbook from page 3 to 371 to 374 to match the sequence. He further revealed that the log was amended to indicate that more police officers had set off for duty instead of the real number.

Former OIC of the Kotahena Police Mahinda Karunaratne, who later testified before the panel last evening, said a document on the Easter attacks was not received by the police station prior to April 21 and that the relevant documents were sent to the police station in the afternoon of the day of the attack by SP Sanjeewa Bandara’s personal assistant, Inspector Upendra via another police officer.

He added that SP Sanjeewa Bandara arrived at the Kotahena police station at 9.00 p.m. on the day of the attacks. He also said that SP Bandara had told him the relevant documents could not be sent to the police station since his personal assistant had misplaced it.

SP Bandara had reportedly instructed that logbooks be amended to show that the documents were received by the Kotahena Police prior to the attacks.