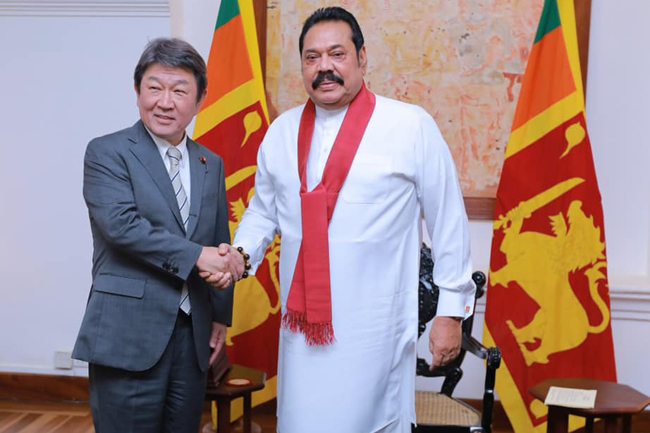 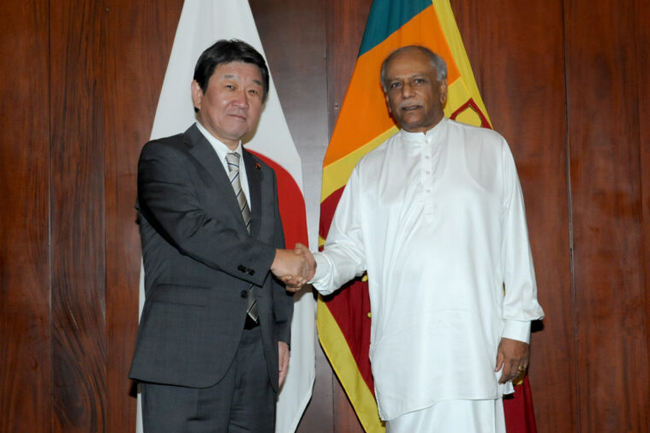 Foreign Minister Motegi hand-delivered a letter from Japanese Prime Minister Shinzo Abe to his Sri Lankan counterpart, in which he had congratulated Prime Minister Rajapaksa on assumption of office.

In his letter, Prime Minister Abe has said the visit of the Foreign Minister soon after the new administration took office following the presidential election held in November is the “expression of Japan’s determination to support Sri Lanka proactively.”

Noting the bilateral relations that date back 66 years, PM Rajapaksa has said, “Our relations are already very strong. My hope is to make them even stronger.”

In its vision to promote a “Free and Open Indo-Pacific,” Japan expressed continued interest in assisting in the “sustainable development of Sri Lanka as a hub of the Indian Ocean.”

Both delegations discussed the status of existing joint projects such as work at the Bandaranaike International Airport (BIA) and the Central Express Highway. Future potential collaborations were also discussed.

Welcoming the visiting dignitary, Minister Gunawardena conveyed Sri Lanka’s sincere appreciation for the continued assistance and support extended by Japan for the country’s socio-economic development and shared with the Minister the road map of the new Government to achieve security and prosperity to all Sri Lankans.

Minister Motegi stressing the importance of implementing the Japan funded-projects, re-iterated that Japan will remain a steadfast supporter and contributor in Sri Lanka’s journey to achieve sustainable development and growth.

The visiting Minister, citing the importance of an official visit, extended an invitation to Foreign Minister Gunawardena to visit Japan in the near future.

The two dignitaries discussed possible areas of cooperation across a broad spectrum of relations and agreed to explore ways and means to deepen the partnership in many fields of common endeavour.

The Japanese Foreign Minister was accompanied by Ambassador of Japan to Sri Lanka Akira Sugiyama and a senior delegation from Tokyo. Acting Foreign Secretary Ahmed A. Jawad and senior officials of the Ministry of Foreign Relations also attended the meeting.