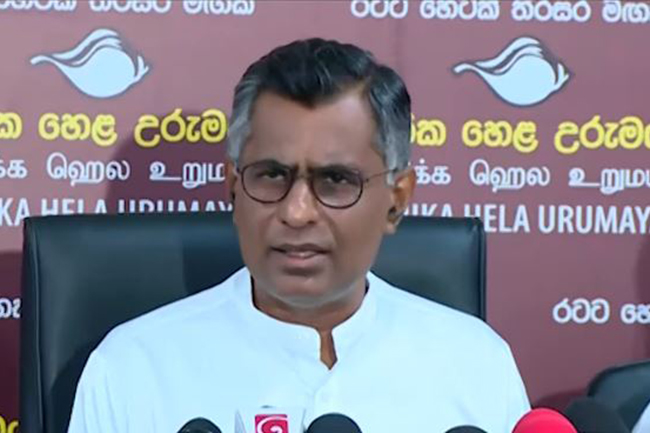 Former Minister Patali Champika Ranawaka has insisted that the alleged hit-and-run he is accused of is a simple accident, despite him being imposed an overseas travel ban.

Addressing a media briefing held yesterday (14), the parliamentarian emphasized he was cleared of the accusations levelled at him following the investigations.

Ranawaka further stated that the person who drove the vehicle at the time of the accident was imposed a fine of Rs 3,500 and that the hearing came to an end.

He also denied the claims that he had been driving the vehicle in question when the accident took place. However, back in 2016, one of the friends of the motor victimized youth alleged that it was then-Minister Patali Champika Ranawaka who had driven the vehicle. The parliamentarian said this was a story made up and made public by media.

Ranawaka said he was not declared guilty of the accident and that he was simply requested to give support to the investigations.

In 2016, the vehicle in which the former Megapolis and Western Province Development Minister was travelling in had collided against a motorcycle, causing life-threatening injuries to its rider.

The injured youth was identified as Sandeepa Sampath from Godagama area.

A friend of this youth came forward saying he had given a chase to the vehicle that caused the accident and that it was MP Patali Champika who had driven the vehicle.

Despite the youth’s testimony, another person had surrendered to the Borella Police over the incident.

Although footage obtained from CCTV cameras were used in the investigation, the footage from the day of the incident had already erased, the police had told the court when the case was taken up in March 2016.

However, the Colombo Crimes Division (CCD) recently presented submissions to the Colombo Magistrate’s Court on the alleged hit-and-run case.

The CCD sought the court to temporarily suspend the foreign travels of the parliamentarian and the person who claimed to have driven the vehicle at the time of the incident.

Taking the request into consideration, the magistrate temporarily imposed an overseas on Ranawaka and his then-driver.

When Ada Derana visited Sandeepa’s place yesterday (14), his parents called for justice for their son. Despite meeting then-Minister Ranawaka three times, their pleas fell on deaf ears, they said while urging the current government to take the matter up.

The youth’s parents revealed that a police officer had visited them at their home and requested them to withdraw the entry they had made with the police saying that his job was on the line.