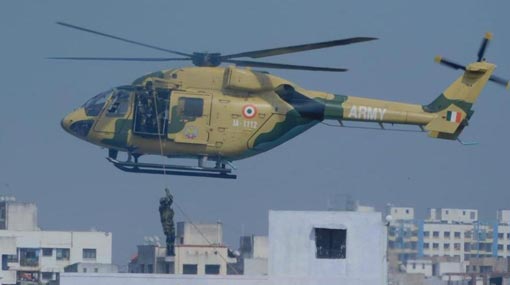 The seventh edition of the joint training exercise between the Indian Army and the Sri Lankan Army, Exercise Mitra Shakti 2019, concluded on 14 December at Aundh Military Station, Pune, India.

Contingents comprising 120 personnel each from the Sri Lankan and Indian Armies participated in the exercise.

The two-week-long exercise had commenced on 1 December and focused on enhancing interoperability for developing the capability to undertake joint operations in counter-terrorism operations under the United Nations mandate.

The culmination exercise showcased the standards achieved by the contingents during the joint training & demonstrated the commitment as well as capabilities of the participating armies in working closely with each other to maintain world peace under the United Nations flag.

Both the contingents displayed high degree of professionalism while practicing various counter-terrorism drills which has been a great learning experience for both the contingents, said the Ministry of Defence in a Press communication, adding that the standards displayed by the contingents delivered a strong & reassuring message with regards to the intent, commitment & capability of both the armies towards maintaining world peace & upholding the mandate of United Nations.

The conduct of such bilateral military training exercises is an important step to uphold the values of peace, prosperity, international brotherhood & trust.