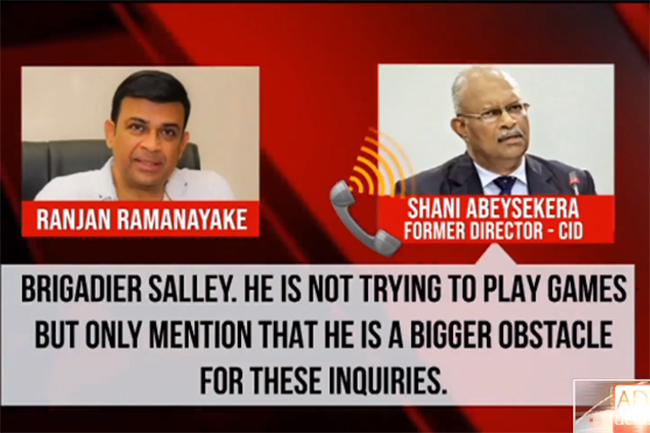 A recording of a controversial telephone conversation between MP Ranjan Ramanayake and former Director of the Criminal Investigation Department (CID) Shani Abeysekara has been released to the media.

This conversation is transpired to be a conspiracy to remove the former Army Intelligence Chief Brigadier Suresh Salley, who is alleged to have been a hindrance to investigations.

In contrast to the subject of the conversation, the duo admits to former Army Intelligence Chief Salley being a man of honour.

Addressing a media briefing today (07), Retired Major General Ajith Prasanna, the Convenor of War Heroes for the Motherland organization, said Shani Abeysekara wanted to take out Brigadier Salley and that it was conspired through MP Ranjan Ramanayake to be conveyed to then-President. Eventually, Brigadier Salley was removed, he said, adding that a brigadier of the Sinha Regiment who has not even studied intelligence was then appointed to the post.

“This is why our national security and intelligence collapsed,” Mr. Prasanna pointed out. Hence, Shani Abeysekara and Ranjan Ramanayake are both responsible for the Easter Sunday terror attacks as they removed the intelligence chief based on lies, he continued.

“That very Suresh Salley has been appointed the State Intelligence Chief by President Gotabaya Rajapaksa and we thank him for that,” Mr. Prasanna said further.

In the series of telephonic recordings of MP Ranjan Ramanayake that were uncovered recently, a previous conversation between him and former Prime Minister Ranil Wickremesinghe, which took place back in 2016, was discussed during today’s parliamentary session.

Addressing the Parliament, State Minister Mahindananda Aluthgamage claimed that a telephone conversation between the former Premier and the former Deputy Minister plotting to assassinate him was circulating in social media platforms.

In 2016, then-Deputy Minister Ranjan Ramanayake had lodged a complaint with the Bribery Commission, against State Minister Aluthgamage over a Defender, which was a property of the State. However, an argument between Aluthgamage and Ramanayake in this regard had come to blows.

In this backdrop, during a parliamentary session in 2016, MP Padma Udayashantha had raised questions regarding the gunshots that were heard from the Madiwela housing complex of the parliamentarians on the 23rd of June, 2016.

Responding to these questions, former Prime Minister had told the Parliament that MP Ramanayake had been engaged in a practice session for a movie on that specific day.

MP Ramanayake had telephoned the former Prime Minister to thank him for defending him.