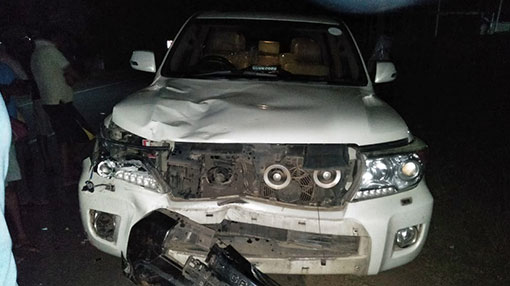 One person was killed while another two including a child were critically injured in a road accident involving a motorcycle and Minister S.M. Chandrasena’s vehicle at Kahatagasdigiliya.

The accident had occurred in the Ranpathwila area in the Kahatagasdigiliya police division along the Puttalam-Trincomalee road at around 7.35 p.m. last night.

A luxury SUV, in which the Minister of Environment and Wildlife Resources had been traveling towards Anuradhapura, had collided head-on with a motorcycle.

The injured child has been transferred to the Anuradhapura Hospital for further treatment.

According to hospital sources, the woman had injured her spine while the child had sustained injuries to one of her legs.

The deceased has been identified as P. Ranjan Kumara, 35, a civil security officer from Kahatagasdigiliya. The injured persons are reportedly his wife and daughter.

A suspect has been arrested in connection with the incident and he is currently receiving treatment at the Anuradhapura Hospital under police custody.