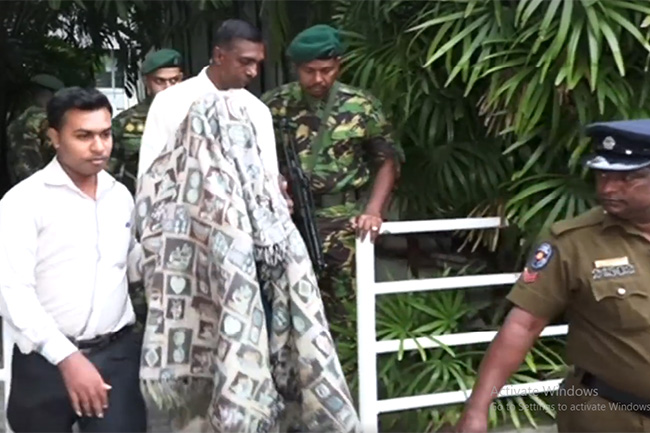 A man under heavy security with his face concealed gave evidence today before the Presidential Commission of Inquiry (PCoI) probing the Easter Sunday attacks, revealing various activities of the carnage’s ringleader Zaharan Hashim.

Without confirming the identity, he revealed a number of moves of Zahran. Among the information divulged were Zahran’s killing of informants just as done by the Islamic State. The witness said he linked up with Zahran Hashim following the riots which took place in Digana.

The witness identified himself as a resident of Mawanella area and the national organizer of the Student Working Committee of the organization Jamaat-e-Islami.

The PCoI refused to reveal the identity of the individual who arrived at the Commission under heavy security. The witness gave evidence via video technology from a separate chamber.

The witness has told the PCoI that he had first come across a lecture delivered by Zahran on WhatsApp and later obtained details on him on him via social media.

When a video was played to the witness, he confirmed it to be the video which he first came across of Zahnran’s. The witness also divulged that Zahran had told him of his links with the terror group ISIS.

The witness was in attendance at a lecture conducted by Zahran Hashim in June 2018, where the T-56 firearms were distributed among the attendees.  When the members of the Commission asked the witness to reveal the contents of the lecture, he said the topic of Buddhis extremist and the conduct of the organization Bodu Bala Sena were touched upon during the lecture.

Testifying further, he said Zahran told him that he backed the election campaign of former President Maithripala Sirisena back in 2015.

According to the witness, Zahran had threatened to kill the attendees of the lecture conducted in Hambantota if information is leaked to a third party, similar to that of the conduct of the terror group ISIS.

He also mentioned that a group of between 150-2200 people had attended Zahran’s lectures adding that Zahran had shot dead the person who revealed information which led to the discovery of arms from Wanathawilluwa.

The witness was seen leaving the PCoI premises after recording his statement which lasted for nearly 8 hours.