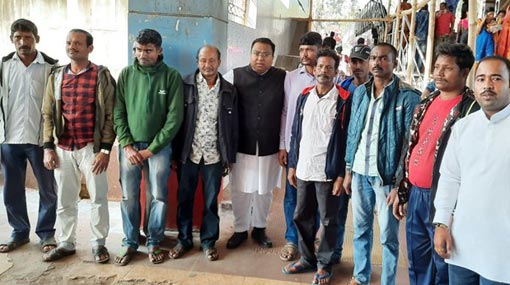 Eleven construction workers, who were held by their contractor at Colombo in Sri Lanka, returned to Odisha, India on Sunday in two phases, reports foreign media.

Four of them had reached Odisha on January 11 and the rest arrived at Bhubaneswar on Sunday.

The 11 people had left for Sri Lanka on November 5 last year through two local agents. They alleged that the agents had taken INR 60,000 from each of them. “The agent had promised us that the construction company in Sri Lanka will pay INR 30,000 per month to each of us. When we reached there, we found the agent was telling lie,” said one of these workers, Balaram Rout, 45, of Hatimunda village under Banapur police station in Khurda district.

He said the company did not take their responsibility. “A contractor had hired us by taking the name of the infrastructure company. We were working in a ready mix plant used for building works near Kuriniyawatta. The contractor was forcing us to work for around 14 hours a day. Food was very bad. Sometimes we were not getting food. We worked 26 days, but the contractor did not pay our wage,” said Rout.

Debaraj Nayak, another worker, said the contractor did not allow them to go out. “We had stopped our work on January 2. With the help of a local people, we got internet support to send our ordeal video to our relatives here. They approached the local leaders about the issue. Later the state government helped us to get out of this country,” he added.

Indian Rajya Sabha member Sasmit Patra, who is also a member of the departmental consultative committee on external affairs, said chief minister Naveen Patnaik had intervened into the matter. “After getting information regarding the Odia people stranded in Sri Lanka, I requested the Union ministry of external affairs to take up the case. I was following up the case with the ministry till they reached India,” he added.