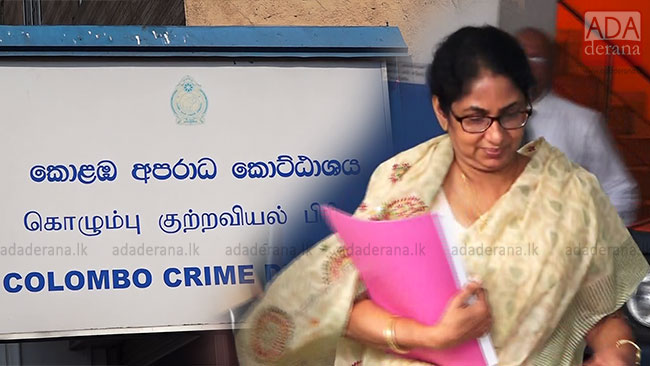 Retired High Court Judge Padmini Ranawaka has reportedly left the Colombo Crime Division (CCD), a short while ago, after recording a statement for over three hours.

Ada Derana reporter said that the former Judge left the premises of the CCD after recording a statement for over three hours.

Ranawaka arrived at the CCD this afternoon to record a statement regarding the controversial phone recordings involving MP Ranjan Ramanayake.

The CCD had also recorded a statement from High Court Judge Gihan Pilapitiya yesterday with regard to the controversial phone recordings with MP Ranjan Ramanayake, on the instructions of the Attorney General.

The Police Media Unit said that accordingly CCD officers had recorded a statement from the High Court Judge for nearly 5 hours last evening (19).

Last week, the Attorney General directed the CCD Director to record statements from the judges who were involved in the controversial telephone conversations with UNP MP Ranjan Ramanayake, without delay.

Earlier this month, a series of audio recordings of phone conversations between the MP and several high-profile officials in the country including former Director of the Criminal Investigation Department (CID) Shani Abeysekara and justices, had been released to the media.

Baddegama Magistrate Dhammika Hemapala had been interdicted by the Judicial Services Commission (JSC) last week over the issue while the commission had also sent its recommendations to the President on High Court Judge Gihan Pilapitiya.