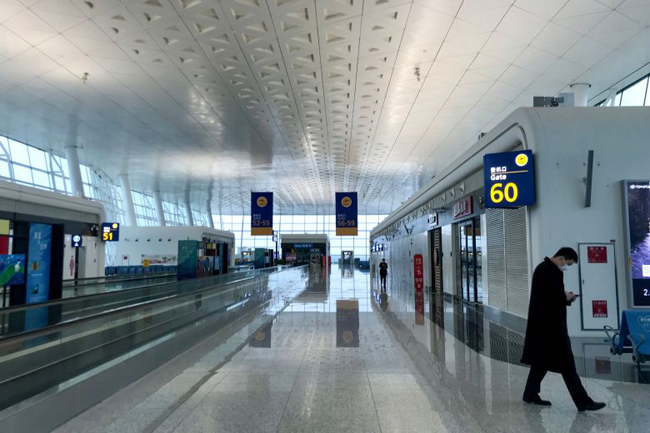 Another Chinese city on lockdown over coronavirus

A second Chinese city – Huanggang - will go into lockdown in an effort to control the spread of a new virus which has left 17 dead in the country.

Authorities have suspended planes and trains in and out of Wuhan - a city of 11 million people - as well as buses, subways and ferries.

Similar measures will take effect in nearby Huanggang, a city of more than seven million, as of midnight.

There are more than 500 confirmed cases of the virus, which has spread abroad.

Countries around the world have announced they will be screening travellers for signs of infection.

Wuhan is at the centre of the outbreak and believed to be where the virus originated.

Residents have been told not to leave. Worried about a food shortage, one Wuhan resident said it felt like “the end of the world”.

The lockdown comes as millions of Chinese people travel across the country for the upcoming Lunar New Year holiday.

All outbound flights from Wuhan have been suspended as of Thursday. A handful of inbound flights still appear to be operating, though many flights have been cancelled.

Several regional airlines - including Malaysia’s AirAsia and Singapore Airlines’ budget carrier Scoot - have announced a temporary halt to flights to and from Wuhan.

Another Wuhan resident said on social media site Weibo that they were on the “verge of tears” when they heard about the closures.

Supermarket shelves were reportedly bare as residents scrambled for supplies, while people took to social media to complain about soaring prices for groceries.

Residents had already been told to avoid crowds and minimise public gatherings, and health authorities have reportedly made wearing a mask in public places mandatory.

State news agency Xinhua said tourist attractions and hotels had been told to suspend large-scale activities while libraries, museums and theatres were cancelling exhibitions and performances.

And the lockdown is spreading. Public television in Huanggang - east of Wuhan - has also announced a suspension of its bus and rail system from midnight, and encouraged people not to leave the city. Cafes and cinemas will also be shut.

On Thursday, China’s National Health Commission released details of the 17 victims. The youngest victim was 48 and the oldest was 89. Most of them were elderly and suffered from other chronic diseases including Parkinson’s disease and diabetes.

All the fatalities so far have been in Hubei province, of which Wuhan is the capital.

Currently known as 2019-nCoV, the virus is understood to be a new strain of coronavirus not previously identified in humans. The Sars (Severe Acute Respiratory Syndrome) virus that killed nearly 800 people globally in the early 2000s was also a coronavirus, as is the common cold.

This new virus originated in a seafood market in Wuhan that “conducted illegal transactions of wild animals”, authorities have said. The market has been shut down since the beginning of the year.

Some researchers have suggested the illness may have originated in snakes. A study published on Wednesday in the Journal of Medical Virology said genetic analysis suggests snakes are “the most probable wildlife animal reservoir” for the virus but this would need to be confirmed by other studies. Other researchers have questioned the claim.

There is also evidence of human-to-human transmission with the virus having spread from patients to family members and healthcare workers.

But understanding more about how the virus transmits between people is one of the major outstanding questions in this outbreak.

The virus infects the lungs and symptoms start with a fever and cough. It can progress to shortness of breath and breathing difficulties.

After a day of discussions in Geneva on Wednesday, the World Health Organization’s (WHO) emergency committee announced it would not yet declare a “global emergency” over the new virus.

Director General Dr Tedros Ghebreyesus said more information was needed about the spread of the infection. The committee of health experts will meet again on Thursday.

A global emergency is the highest level of alarm the WHO can sound and has previously been used in response to swine flu, Zika virus and Ebola.

There have been cases in several countries, including as far away as the United States.

Officials in Hong Kong reported the territory’s first two cases on Wednesday and one case was reported in the nearby city of Macau.

The patient in Macau is said to be a businesswoman who arrived from Wuhan over the weekend.

The first US case was confirmed on Tuesday. President Donald Trump said the situation was “totally under control” and that he trusted the information being provided by Chinese authorities.

There have been three cases in Thailand, one in Korea, one in Japan and one in Taiwan.

Although only about 500 cases have been confirmed globally , calculations by scientists at the MRC Centre for Global Infectious Disease Analysis at Imperial College London estimate there could be 4,000 people sick with the virus in Wuhan.