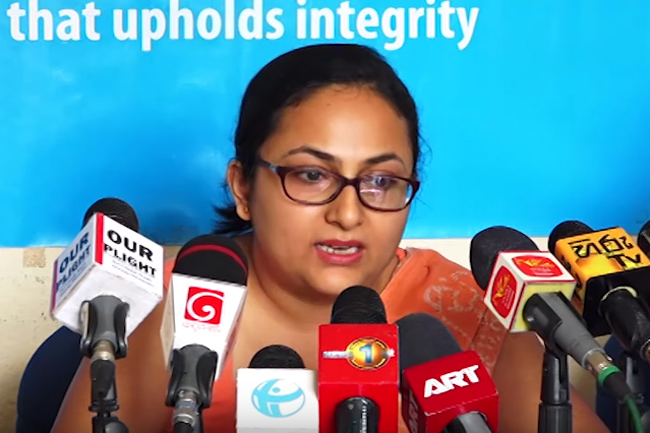 It is possible for Sri Lanka to improve its rank on the Corruption Perceptions Index (CPI) 2019, says the Manager of Research and Policy at Transparency International Sri Lanka (TISL) Maheshi Herat.

Addressing a press conference on the CPI 2019 which was issued by Transparency International, Herat said the government has a responsibility in making an improvement in this regard.

She added that, with the general election drawing closer, the government has an opportunity to make a change in the country’s stagnant anti-corruption environment.

In the CPI 2019 compiled by Transparency International, -- the Berlin-based parent organization of TISL --, Sri Lanka scored 38, which is well below the average score of 45 in the Asia Pacific region.

Sri Lanka is 3rd among SAARC countries which are led by Bhutan with a score of 68 -- a 30 point gap with the island nation.

Issuing a statement yesterday (23), the TISL said that the CPI 2019 score highlight Sri Lanka’s stagnant anti-corruption environment, which has seen the country’s CPI score fluctuate between 36 and 38 since 2013.

According to Transparency International, CPI 2019 has revealed that a majority of countries are showing little to no improvement in tackling corruption.

The CPI has ranked a total of 180 countries and territories by their perceived levels of public sector corruption, according to experts and business people. Transparency International said the index uses a scale of zero to 100, where zero is highly corrupt and 100 is very clean.

However, in CPI 2019, more than two-thirds of countries score below 50, with an average score of just 43. “Similar to previous years, the data shows that despite some progress, a majority of countries are still failing to tackle public sector corruption effectively,” the global coalition against corruption stated.