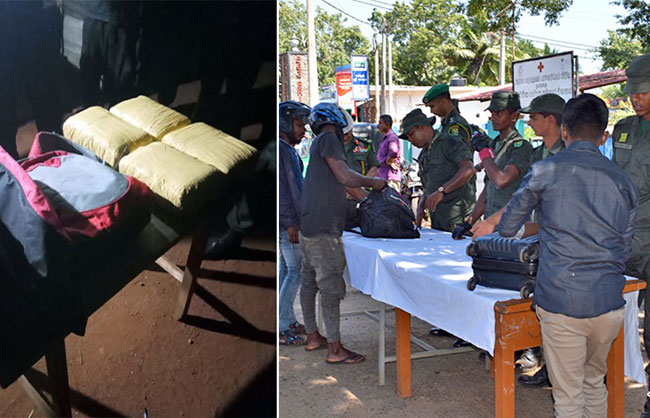 Sri Lanka Army (SLA) has detected 20 kilograms of Kerala ganja and 99.5 ft of satin wood during a 12-hour special search operation, conducted on the A9 road.

The special search operation, which concluded in the morning of Sunday (26), was carried out by the soldiers attached to the 56 Division in Wanni where the army had put roadblocks at Puliyankulam and Omanthai.

The stocks of cannabis had been transported in the buses that operate from the North to the South.

Troops were deployed to assist the Police under the directives of the Acting CDS and SLA Commander Lt. Gen. Shavendra Silva.

The solders of the 16th Sri Lanka Sinha Regiment (SLSR) and 21st SLSR serving under 561 and 563 Brigades arrested the suspects during the search operations conducted from Saturday evening to the following day morning.

Eight suspects with Kerala ganja in their possession and the bus transporting satinwood were produced before the Vavuniya magistrate on Sunday (26).