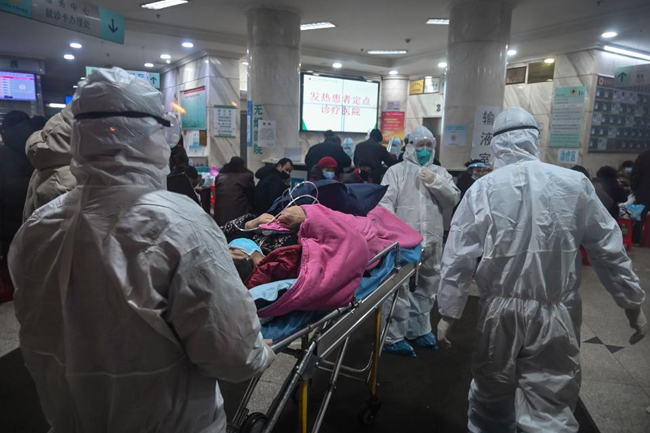 The U.S. and Japan on Wednesday began evacuating their citizens from the Chinese city hardest-hit by an outbreak of a new virus that has killed 132 people and infected more than 6,000 on the mainland and abroad.

China’s latest figures cover the previous 24 hours and add 26 to the number of deaths, 25 of which were in the central province of Hubei and its capital, Wuhan, the epicenter of the outbreak. The 5,974 cases on the mainland marked a rise of 1,459 from the previous day, although that rise is a smaller increase than the 1,771 new cases reported on Monday. Dozens of infections of the new type of coronavirus have been confirmed outside mainland China as well.

A Japanese chartered flight carrying 206 evacuees from Wuhan included some who had coughs and fever on the plane, Kyodo News reported, citing health ministry officials. They were expected to be taken by ambulances to a Tokyo hospital specializing in infectious diseases.

Takeo Aoyama, an employee at Nippon Steel Corp.’s subsidiary in Wuhan, told reporters he was so relieved to be able to return home, and thanked the government for arranging the flight.

“We were feeling increasingly uneasy as the situation developed so rapidly and we were still in the city,” Aoyama told reporters, wearing a white surgical mask that slightly muffled his voice. “My uneasiness peaked when the number of patients started to spike.”

Another of the evacuees, Takayuki Kato, said their temperatures were taken before the plane left Wuhan and again by a doctor on board.

Both Kato and Aoyama said they didn’t see anyone with obvious symptoms or feeling ill near their seats. All of the passengers were expected to undergo further health checks and were expected to stay home until a lack of infection was confirmed.

Aoyama said more than 400 Japanese people wishing to return to Japan are in Wuhan, including those who are working for a Japanese supermarket chain that stays open to serve customers who need food.

He said it is important to step up preventive measures in Japan, but “I hope we can also provide support for the Chinese people, which I think would also help the Japanese people who are still there.”

A plane carrying Americans who had been in Wuhan left for Anchorage, Alaska, where they will be rescreened for the virus. Hospitals are prepared to treat or quarantine people who may be infected. Then the plane is scheduled to fly to Ontario, California.

The British government is warning against “all but essential travel” to mainland China amid the outbreak of the new type of coronavirus. And Hong Kong’s leader said the territory will cut all rail links to the mainland and halve the number of flights to stop the spread of the virus.

South Korea also said it will send a plane, and France, Mongolia and other governments also planned evacuations.

China has cut off access to Wuhan and 16 other cities in Hubei province to prevent people from leaving and spreading the virus further. The lockdown has trapped more than 50 million people in the most far-reaching disease control measures ever imposed.

The Japanese flight was bringing 20,000 face masks as well as protective gear, all in short supply as Chinese hospitals treat a growing number of patients. Wuhan is building two hospitals in a matter of days to add 2,500 beds for treatment of patients with the virus.