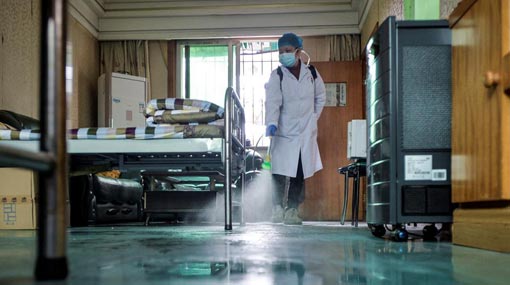 The Japanese authorities announced on Thursday the first death in the country from the new coronavirus.

Health Minister Katsunobu Kato said at a news conference that the victim was a woman in her 80s who lived in Kanagawa Prefecture, just south of Tokyo.

The confirmation came after the woman’s death on Thursday, and is the third death from the coronavirus outside mainland China. The other two were in the Philippines and Hong Kong. The woman had no record of travel to mainland China.

The news of the death came as Japan announced new cases, including 44 more on a cruise ship quarantined in the waters off Yokohama, and new infections among people not on the ship.

Mr. Kato said that one of the new cases was a taxi driver in his 70s in Tokyo who tested positive for the virus on Thursday.

With 218 cases on the ship, Mr. Kato said on Thursday that the authorities would begin allowing some passengers to disembark and serve out the remainder of the quarantine period on shore.

Mr. Kato said that if they first test negative for the virus, passengers 80 or older who have existing medical conditions or were assigned to cabins without windows or balconies would be taken to facilities for confinement until the quarantine is scheduled to end on Feb. 19. Those who test positive will be taken to hospitals.

Of the newly confirmed cases, Mr. Kato said, 43 were passengers and one was a crew member.

The cruise ship, the Diamond Princess, arrived in Yokohama on Feb. 3, and passengers were expecting to go home the next day. But after learning that a man who got off the ship in Hong Kong had tested positive for the coronavirus, the Japanese government quarantined all 3,700 passengers and crew members on board. The quarantine period is scheduled to last for two weeks.

Also on Thursday, another cruise ship, the Westerdam, which had been denied permission to stop in Japan, Guam, Taiwan and the Philippines despite having no diagnoses of coronavirus, was able to dock in Cambodia.