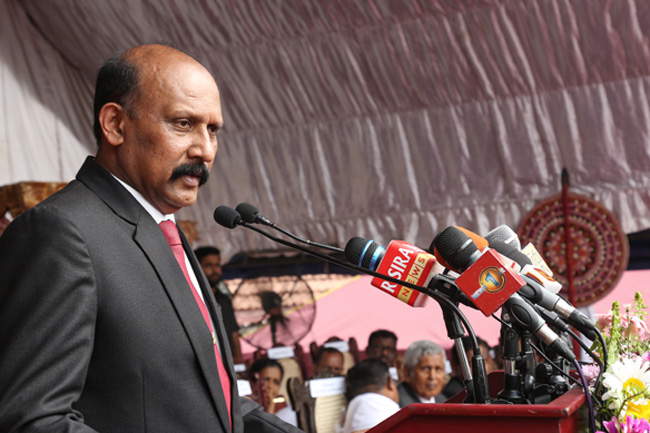 Defence Secretary pledges not to leave space for terrorism

Defence Secretary Major General (Retired) Kamal Gunaratne has pledged not to leave room for terrorism to destabilise the country’s peace in future under the current leadership.

He said peace was earned through immense sacrifices made by the Security Forces who fought for three decades to end terrorism.

Addressing an event held at Dharmapala Vidyalaya, Pannipitiya yesterday, the Defence Secretary vowed that security will be ensured and the current government will not play with national security, which was previously put on risk for the sake of ensuring democracy and reconciliation.

At the ceremony organized to felicitate him by his alma mater, Dharmapala Vidyalaya, where he had his primary education, the Defence Secretary recalled how he was motivated to join the cadet team.

He added that as soldiers they had sacrificed their youth for the future of the younger generation.

“Many young soldiers died and many became disabled with some still lying on hospital beds as vegetables in their fight against terrorism to make a peaceful future to our children,” Maj.Gen. Gunaratne said.

Referring to retired and serving Tri-Forces, Police and Civil Security Department members present at the occasion he said a large number of Security Forces, Police and high ranking government officers produced by the school had proudly served the country.

“The fallen and disabled war heroes were also among them who fought in the war to bring peace to the country”, he said.

Gunaratne requested the students to refrain from getting addicted to drugs and to support the government to fight against drug menace.