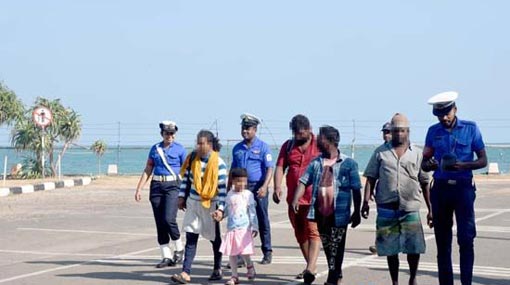 After having spotted a suspicious dinghy plying in the sea area north of Talaimannar, a naval craft patrolling in the above sea area has apprehended this group of people who were attempting to illegally migrate to Sri Lanka via sea route.

Among the apprehended persons were 03 Indian nationals – a 39 year old male, a 33 year old female, a 07 year old girl – and 02 Sri Lankans who ferried these Indians by the dinghy.

The apprehended Sri Lankan suspects have been identified as residents of Pesalai in Mannar, aged 36 and 44, stated the Navy.

Having escorted the accused to the naval base SLNS Thammanna in Talaimannar, they were administered first aid and necessary medical facilities by the Navy.

Subsequently, the suspects, along with the dinghy, were handed over to the Talaimannar Police for onward investigation.