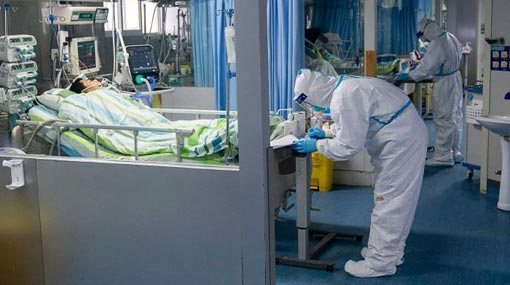 The number of cases of the novel coronavirus has risen to over 69,000 worldwide, with the first death from Covid-19 reported in Europe.

As of Sunday morning, there were 68,500 cases of the virus recorded in mainland China, an increase of 2,009 on the previous day. Chinese health authorities recorded an additional 142 deaths on Saturday, bringing the global total to 1,669, all but four of which occurred in mainland China.

The first death to occur outside of Asia was reported in France on Saturday: an 80-year-old Chinese tourist who had been receiving treatment for Covid-19 since January 25. Deaths have also occurred in Hong Kong, the Philippines and Japan.

So far, almost 9,500 patients with the coronavirus have been treated and discharged from hospitals across China, the country’s health authorities said.

There are concerns, however, that the stringent quarantine measures taken across the country may have not been enough to contain the virus’ spread -- several major cities have now been on lockdown for nearly a month. On Saturday, authorities in Beijing ordered a mandatory 14-day quarantine for all travelers returning to the city, with anyone found violating the rules subject to potential legal repercussions.

Cruise ship quarantine
Thousands of passengers on board the Diamond Princess cruise ship, docked at the Japanese port of Yokohama, are days away from the official end of their two-week quarantine.

On Saturday, Japan said another 67 cases had been confirmed on board the ship, bringing the total to 286. It is the largest outbreak of the virus outside of mainland China.

Some passengers will be able to leave Sunday, with the United States providing a charter flight to transport its citizens on board the ship home. But those who boarded the plane would have to endure another 14-day quarantine, this time at Travis Air Force Base in Fairfield California or Lackland Air Force Base near San Antonio, Texas, when arriving back on US soil. They will not be housed alongside people who have been placed under quarantine after returning to the country from China.

“The US government has chartered flights that will depart Yokohama to the United States on Sunday, February 16,” the country’s embassy in Tokyo said in a letter to passengers Sunday. “These charter flights are the only opportunity for eligible passengers to fly to the United States until March 4, 2020, at the earliest. This date is 14 days after the remaining passengers are expected to depart the ship on February 19.”

The letter added that “passengers and crew members (on board the Diamond Princess) are at high risk of exposure” to the virus and the government was therefore “chartering these flights to minimize the risks to your health going forward.”

“No symptomatic or infected passengers will be allowed to board,” it said.

The offer to leave comes as operator Princess Cruises warned passengers that disembarkation could take several days, beyond the official end of their quarantine period.

“The Japanese government have informed us that they may start a new testing process for guests beginning February 18,” Princess Cruises President Jan Swartz said in a statement. “We understand there is a limit to the number of tests the Japanese government can complete each day, so testing all of our remaining guests could take a few days to complete.”

Swartz said that “at this time we do not know, and have no control over, the order in which the Japanese Ministry of Health will test guests,” warning that those who have had close contact with someone positive for the virus may have to restart their quarantine, counting from the day of last contact with the virus-positive individual.

The crew of the ship -- some of whom have complained about being exposed to the virus during the quarantine -- will likely have to undergo another 14-days of quarantine after the passengers have left.

Swartz said that crew were not quarantined from the start because “the Japanese government view the guests as more susceptible to the virus due to age, health profiles, among other factors. Therefore, guests were potentially at higher risk, for this reason a different quarantine protocol was implemented.”

“Of course, all (crew members) will continue to be compensated throughout the entire period, and two months of paid time off they receive will begin after they are released from quarantine,” she added. “It is disappointing for all of us.”

With the head of the US Centers for Disease Control (CDC) warning that the virus will likely be with us “beyond this season, beyond this year,” attention is turning to how to contain it while avoiding too much disruption to the global economy.

China is struggling to return to work after businesses were shut and schools suspended for weeks. Millions are now working from home, with Chinese President Xi Jinping warning on Monday that the country needed to stabilize its economy and avoid mass layoffs.

But it’s not just China affected -- the closing of Chinese plants has disrupted supply chains globally, threatening to cause a recession in Germany and smartphone shortages worldwide.

Economists say the current level of disruption is manageable. If the number of new coronavirus cases begins to slow, and China’s factories reopen soon, the result will be a fleeting hit to the Chinese economy in the first quarter and a dent in global growth.

If the virus continues to spread, however, the economic damage will increase rapidly.

“This is continuing to grow in scope and magnitude,” said William Reinsch, a senior adviser at the Center for Strategic and International Studies. “It could end being really, really big, and really, really serious.”