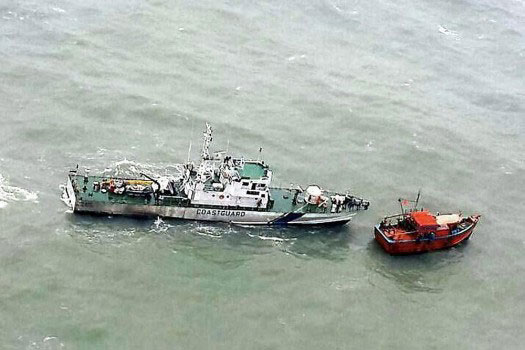 In a joint operation by the Indian navy, marine police and customs department, three Sri Lankan fishermen were caught off Arichal Munai near Dhanushkodi on Saturday with 3.5kg gold worth nearly 15 million Indian rupees, which was unearthed from their boat on Sunday.

Four Indian fishermen who were supposed to receive the gold were also handed over to the customs department, Indian media reported.

As the men tried to cross into Sri Lankan waters, Indian Navy chopper INS Parundu forced them to Arichal Munai beach near Dhanushkodi. The men were identified as Anthony Suganth, 26, Santhiya Thomas Luvis, 32, and Thavasin Dominic Sahaya Vinistro, 24, from Talaimannar in Mannar district in Sri Lanka.

“They said they handed over the gold to four Rameswaram fishermen who came in a particular mechanised boat in mid sea. The Lankan nationals said they were returning to their country when they were caught,” marine police inspector S Kanagaraj told TOI, adding they had difficulty in confirming it as the boat they mentioned had gone to the sea for fishing.

On Sunday, a boat (IND TN 10 MM 356) that reached Pavalam boat yard near Rameswaram Jetty was searched by police, but no gold was found. “We realised we were misguided by the Lankan men. We searched their boat and found 3.5kg gold,” the inspector said.