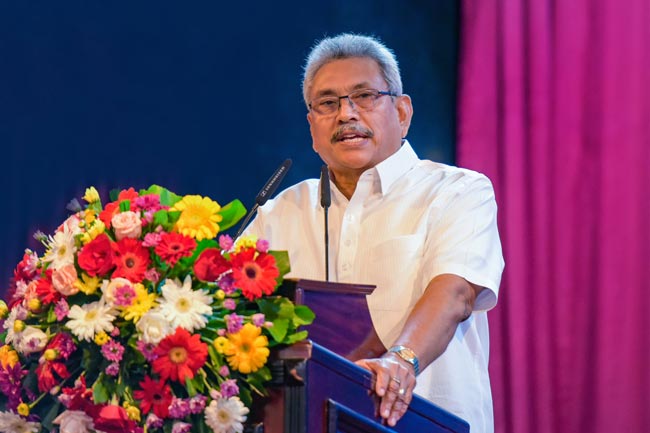 Aim is to eradicate poverty through a people-centric economy - President

President Gotabaya Rajapaksa says his aim is to eradicate poverty by creating a people-centric economy.

The President made these remarks addressing the 22nd National Conference of the All Ceylon Samurdhi Development, Agricultural Research and Production Assistants Union held at the Temple Trees, today (20). The Conference was organized under the theme ‘A people’s era where Samurdhi and agricultural rights are guaranteed’.

“The objective of the government is to raise income levels to create an environment where people from all strata of society could live happily. As part of this program, the government plans to recruit 100,000 unskilled and low educated individuals from low-income families. The assistance of the Samurdhi and Agricultural Research Officers are needed in selecting them”, the President said.

“The number of our public servants is 1.5 million. Public money is spent to ensure their rights and privileges. If the Treasury receives state revenue in a proper manner, the government can guarantee the privileges and rights of all sectors. As a government, we are ready to ensure all the rights of public servants. Public servants, in turn, should fulfill their respective responsibilities towards the country,” the President further stressed.

President said that it is the responsibility of the public officials to facilitate the endeavors that are being undertaken to make the lives of the general public convenient.  President Rajapaksa requested the state officials to apply their wisdom directly to state administration services and suggested them to submit practical proposals in order to promote the living standards of the people as well as economic growth.

“Absence of a second or a follow-up generation in the agricultural sector is an issue. Lack of infrastructure development, non-existence of an appropriate market, market monopoly and mismanagement of the existing infrastructure facilities lead to this crisis. It is essential to address these issues immediately and promote agriculture among the younger generations.” President added.

President Rajapaksa explained that several rules and restrictions have adversely affected the general public. President stated that it is the responsibility of the state officials to relax these rigid laws and restrictions and to make their lives more convenient.

“The incumbent government will not use unwise decisions or faults of our predecessors as an excuse. We are ready to overcome those challenges left over by the former government. For this purpose government needs the support of all state officials” President Rajapaksa noted.
Ministry Secretaries S. Mahanama and Ashoka Alawatta, Samurdhi Director-General and the General Secretary of Samurdhi Association Jagath Kumara Sumithraarachchi, and members of the All Ceylon Samurdhi Development, Agricultural Research and Production Assistants Union were present for this event.