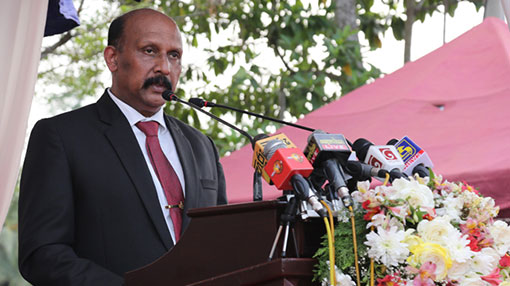 Defence Secretary Maj. Gen. (Retd) Kamal Gunaratne emphasised the need of a disciplined and professional Police force to maintain peace, law and order in the country.

“Police must be committed to ushering a peaceful and prosperous era in the country to maintain high standard of discipline and professionalism gained through basic training in order to deliver a people’s friendly Police service,” he said.

Addressing the gathering at a passing out ceremony, he said discipline and professionalism not only helped to have a disciplined police service but it was also vital to maintain a disciplined society.

Over 528 new officers including 400 constables, 128 driver constables who have successfully completed the basic training to join the service passed out at the Kalutara Police Training School. Among them are 61 Tamil officers and three Muslim officers.

These new officers were given training on Community Police service, management of law and order, disaster management, communication skill development, language skill development and IT under a new syllabus revised by Scotland Police experts.

“We were able to rehabilitate and reintegrate a large number of youth, who have been seriously addicted to drugs. The credit goes to a team of Police officers who have been specially trained on the subject and were attached to the Presidential Task Force for Prevention of Drugs, which was established under a concept by President Gotabaya Rajapaksa,” Maj. Gen. Gunaratne said.

The Defence Sceretary said that leading the country towards sustainable development was a big challenge.

The officers who have excelled in different subjects during the training were awarded with trophies and a drill display and a cultural performance added glamour to the ceremony.

The Defence Secretary and the Acting IGP C.D Wickramaratne exchanged mementoes to mark their presence in the event.

A large gathering including religious dignitaries, Defence Ministry officials, senior officers from the Tri-Services and Police, and family members of newly passed out officers also participated at the event.